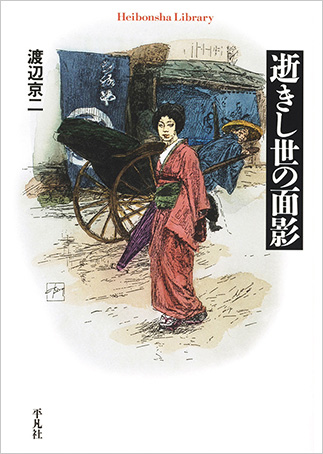 [trans. Remnants of Days Past]

In the latter half of the nineteenth century, following Japan’s opening to the outside world, many Western visitors wrote accounts of their travels and experiences, but today these accounts are little acknowledged. However, the author, Watanabe Kyōji, made a great discovery by tackling this mountain of prose. In the eyes of foreign visitors, he explains, Japan appeared as a country that had achieved a marvelous civilization. As he emphasizes, many of them, though at times bewildered by the great disparity between Japan’s civilization and that of the West, wrote of it in glowing terms. However, he concludes, this civilization died out in the process of Japan’s modernization in the late nineteenth and early twentieth centuries.

These early accounts by foreign visitors have been often regarded negatively by Japanese intellectuals. They thought that the writings were unrealistic in the manner criticized in Edward Said’s Orientalism or that they romanticized a premodern past that deserved to be rejected. Nonetheless, having carefully read through many accounts, Watanabe insists that their appraisals were not without foundation, illustrating his argument with many examples of the charms of Japan’s Lost World.

A picture emerges of “good old days” when even poor people led cheerful and emotionally satisfying lives, women showed surprisingly liberated attitudes toward sexuality, and children were treasured and well looked after. While naturally there might be some idealization here, there is a greater sense of surprise at a first encounter with a different culture. This valuable work offers a new perspective for considering modernization in Japan. (NM)

Born in Kyoto in 1930. Attended school in Dalian, China, under the former Japanese school system before graduating from the Faculty of Social Sciences at Hōsei University, Tokyo. Critic and chief researcher at Kawai Institute for Culture and Education. Received the Watsuji Tetsurō Culture Prize in 1999 for Yukishi yo no omokage. Main works include Kita Ikki, Kurofune zen’ya [The Night Before the Black Ships], Gen’ei no Meiji [Vision of the Meiji Period], and Chichi haha no ki [A Record of My Father and Mother].