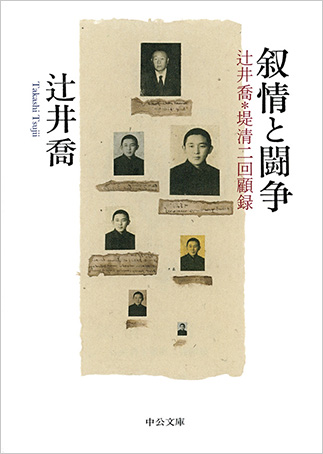 In this memoir, corporate leader and literary figure Tsutsumi Seiji (who adopted the pen name Tsujii Takashi) offers an account of his life.

The memoirist is the eldest son of Tsutsumi Yasujirō (1889–1964), who founded Seibu Railway and went on to be the speaker of Japan’s House of Representatives. Although he went through a period of communist activism, the younger Tsutsumi went on to become a driving force behind mass-consumer society as president of Seibu Department Stores and head of the Saison Group. In his heart, though, he longed for the life of a man of words. In this work he explains his attempt to overcome his emotional conflict in this regard.

Tsutsumi’s account begins in 1959, when he traveled to the United States with his father, then the former speaker of the lower house, and met with Douglas MacArthur (1880–1964) and President Dwight D. Eisenhower (1890–1969); it ends in 1997, when he went to Paris for the funeral of his sister. The book also details his dealings with political and financial leaders, as well as with such artists as Mishima Yukio (1925–70) and Takemitsu Tōru (1930–96).

This book is more than a record of the author’s high-profile acquaintances, though. The intellectual Tsutsumi, who for a time belonged to the Japanese Communist Party, dispassionately analyzes the state of the Japanese left, noting that those who carried out their activism through the prism of historical sociology had a high rate of ideological conversion. He also states his belief that one cannot be both an artist and a successful politician, as “the result is inevitably dictatorship.” (MK)

Born in Tokyo in 1927. Poet, author, and former head of the Saison Group. Known as a businessman under his real name of Tsutsumi Seiji, he has also had a prolific creative life. Received the Murō Saisei Award for Ihōjin [The Stranger], the Tanizaki Jun’ichirō Prize for Niji no misaki [Rainbow Cape], and the Noma Prize for Literature for Chichi no shōzō [Portrait of My Father]. Passed away in 2013.