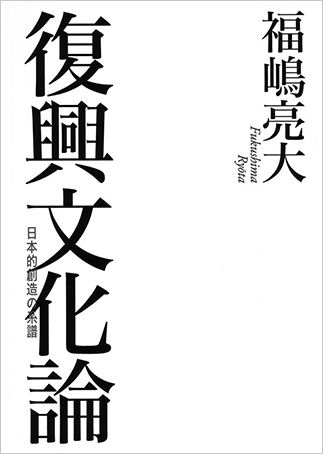 It is during periods of reconstruction immediately following catastrophes or wars that Japanese culture really begins to overflow with creativity. This is the gist of young critic Fukushima Ryōta’s new angle on the essence of Japanese culture. From the Jinshin no Ran (672), a succession dispute that was a major civil war of Japan’s ancient period, to the 1180–85 war between the powerful Genji and Heike clans of the transitional medieval period, and right up through the 1945 defeat in World War II, great turmoil can be seen as followed by a new flowering of culture and reform of society. It is precisely this “rebuilding phase spirit,” the author holds, that has been the driving force and sustenance of the country’s history.

Building on an idea of this grand scale, Fukushima argues the length and breadth of Japanese history, citing poets of the eighth-century Man’yōshū (Japan’s oldest anthology), military tales of the Kamakura period (1185–1333) like the Tale of the Heike, and novelists of our own time and the anime of Miyazaki Hayao (1941–) for a bold and provocative view of the development of culture. His comparisons with Chinese history, which produced a very robust culture through the rise and fall of dynasties, are also insightful.

Although not stated directly, the motive for writing this book was quite likely the March 11, 2011, disaster. We are soon convinced that Japanese do have the ability to turn crisis into the opportunity for cultural rebirth. This is an excellent work endowed with an energy that can fill readers with a sense of hope. (NK)

Born in Kyoto in 1981. Literary critic and scholar in Chinese literature. As well as literature, his critical activities cover a wide range of genres, including Japanese and Chinese subcultures and drama. Received the Suntory Prize for Social Sciences and Humanities in 2014 for Fukkō bunkaron. Other works include Shin’wa ga kangaeru [Mythological Thinking] and Yakkai na isan [Troublesome Heritage].