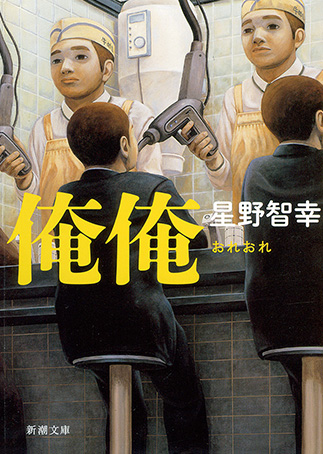 The title of this novel is not easy to translate. In Japanese, ore is a slightly gruff, familiar singular first-person pronoun normally used only by men. The title alludes to the “ore ore scams” that have become a serious social problem in Japan in recent years. These are perpetrated by young men who telephone elderly strangers and pretend to be a son in distress. The aim is to gull the victim into transferring “urgently needed funds” into the conman’s bank account.

The novel opens with a series of random events that lead the protagonist to acquire a stranger’s mobile phone. He uses the phone to con an easy ¥900,000 out of the stranger’s mother. At this stage, the reader expects a contemporary crime story depicting the mores and values of modern society. Instead, the novel takes a bizarre, unpredictable twist and enters the realm of absurdist fantasy. For some reason, the mother remains convinced that the protagonist is her son, even after meeting him face to face. When the narrator returns to his parents’ home, he is startled to find another ore living there and to learn that his mother no longer recognizes him. The number of these ore characters increases steadily, until society is overrun with people claiming the same identity. The competing egos wind up killing and eating one another. This blackly humorous work satirizes the modern identity crisis and the erosion of family and community ties in contemporary society. (NM)

Born in 1965 in Los Angeles. After working as a newspaper reporter, went to study in Mexico. Won the 1997 Bungei Prize for Saigo no toiki [The Last Sigh], the 2000 Mishima Yukio Prize for Mezameyo to ningyo wa utau [“Wake Up,” Sings the Mermaid], the Noma Prize for New Writers in 2003 for Fantajisuta [Fantasista], and the Ōe Kenzaburō Prize in 2011 for Ore ore. Other works include Ronrī hātsu kirā [trans. Lonely Hearts Killer] and Suizoku [Water Tribe].