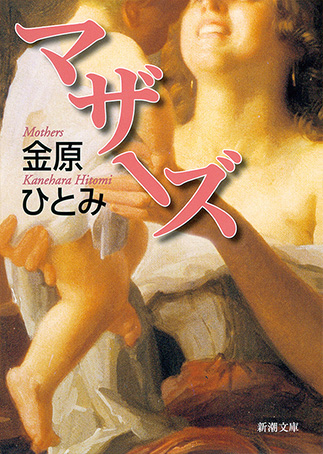 Mazāzu is something of a departure for Kanehara Hitomi, who has been electrifying readers with graphic depictions of sexuality and depraved, edgy lifestyles since her flashy debut as a young author. The theme of Kanehara’s latest novel—as hinted at in the title, the trials of young mothers struggling to raise small children—is almost classical by comparison. Doubtless it was the author’s own experience of marriage, childbirth, and motherhood that enabled her to tackle such a theme head-on.

As the story unfolds, the viewpoint alternates among three young mothers whose children are enrolled at the same daycare center. The first is Satsuki, a fashion model who has a young daughter by her husband and is now pregnant with her lover’s child. Then there is Yuka, a writer whose husband comes home only on weekends, leaving her alone to care for her young child while pressed by deadlines; buckling under the pressure, she resorts to drugs. Ryōko is a stay-athome mother who is so exhausted that she ends up abusing her own son. What these three characters have in common is a terrible sense of isolation afflicting them as they raise their children without the support and understanding of their husbands.

Yet Kanehara does not approach her subject matter as an opportunity for a feminist critique of contemporary Japanese society. Her achievement lies in carving out new paths for contemporary fiction through her unflinching exploration of human love and hate, isolation and togetherness. (NM)