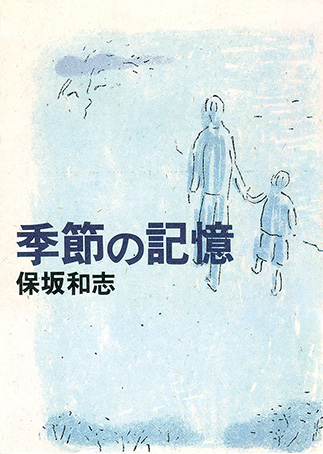 [Memories of the Seasons]

The release of this novel caused something of a stir in the 1990s literary world. The novel itself, however, features no incidents or dramatic episodes. Against the background of the four seasons in the former capital of Kamakura, the divorced narrator, who lives with his five-year-old son Kui, simply reports on his unchanging everyday life with intermittent philosophical speculations.

Distancing himself from his employer and the world, the narrator has plenty of time on his hands. He takes walks by the sea or on the ridge of the mountain, in the evenings enjoying meals and drinks with his congenial neighbors, seeking philosophical and scientific truth through discussion and going over the same ground again and again together. These argumentative exchanges garnered great acclaim from such novelists as Maruya Saiichi, who described the work as “a modern version of Natsume Sōseki’s Wagahai wa neko de aru [trans. I Am a Cat],” and Hino Keizō, who praised the depiction of “human relationships that have opened up, going beyond the excessive closeness of blood ties.”

“Daddy, do they have ants in the ants’ world too?” The question from Kui, who is still too young to read, is a priceless quotidian moment in which abstract concepts and poetic sensibility intersect. This in itself may be a noteworthy incident of sorts. Hosaka’s efforts to establish a new frontline for the contemporary novel began in earnest with this work. (OM)

Born in Yamanashi Prefecture in 1956 and raised in Kamakura. Made his debut with Purēnsongu [trans. Plainsong] in 1990. Received the Noma Prize for New Writers for Kusa no ue no chōshoku [Breakfast on the Grass] in 1993, the Akutagawa Prize for Kono hito no iki [The Area of the Person] in 1995, both the Hirabayashi Taiko Award and Tanizaki Jun’ichirō Prize for Kisetsu no kioku in 1997, the Noma Prize for Literature for Mimei no Tōsō in 2013 and the Kawabata Yasunari Prize for Literature for Koko to Yoso in 2018.