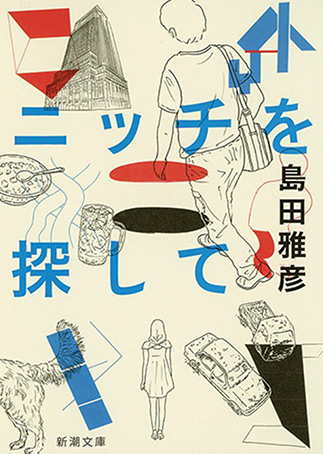 [Looking for a Niche]

Fujiwara Michinaga is an assistant branch manager for a major bank. He disappears one morning after completing a major business negotiation and drawing up a draft of the formal contract. His wife Kyoko and daughter Akiko are bewildered by his disappearance. It then emerges that the more than ¥500 million that should have been transferred to the other company’s account did not arrive. The bank immediately notifies the police, which begins an investigation based on the possibility of embezzlement.

It all began with an unlawful corporate acquisition. The branch manager, Sukita, joined forces with a Chinese broker named Wu Fangtong to inflate the buying price for a company that had engaged in fraudulent accounting and attempted to receive the difference in price as a fee. Michinaga saw what they had done and diverted the acquisition funds into donations and funding for disaster recovery, taking away the original documents relating to Sukita’s and Wu’s concealment of the truth and secret scheme.

Michinaga ends up homeless, running from the police and the clutches of the underworld. He moves between the city and the suburbs, but after two months he is caught by Wu’s subordinate, Suzuki Ryūhei. After squeezing the money out of Michinaga, Wu buries him alive to destroy the evidence. And here the story takes still another dramatic turn.

The work’s primary interest for readers lies mainly in its depiction of homeless life. The tabloid-style plot and topical episodes are nothing more than devices for achieving this. The novel vividly describes the places homeless people gather in Tokyo, such as Ueno Park, Asakusa, and San’ya, and how they live with no fixed address, whether using the Yamanote Line and other rail routes or sleeping rough outdoors. It is a rare work that shines a light on those who live in the shadows of the glamorous life of the city. (CK)

Born in Tokyo in 1961. He rose to fame when his novel Yasashii sayoku no tame no kiyūkyoku [Divertimento for Gentle Leftists], published while he was still a university student, was shortlisted for the Akutagawa Prize. He won the Noma Prize for New Writers in 1984 for Muyū ōkoku no tame no ongaku [Music for the Sleepwalking Kingdom] and the Minister of Education’s Art Encouragement Prize in 2008 for Kaosu no musume [Daughter of Chaos]. His other works include Eiyū wa soko ni iru [A Hero Is There].