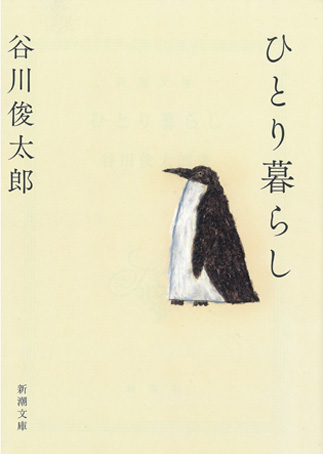 For half a century, the contemporary poet Tanikawa Shuntarō has demonstrated the utmost flexibility in his use of the Japanese language. Readers can only admire the extent of his sophistication and the precision of his phrases as they bring the familiar world into clearer focus.

Hitorigurashi
is a collection of essays conveying the miscellaneous daily impressions of the poet—who in his younger days considered the basic unit of human society to be a man and woman as a couple—as he begins solo life in his late sixties after three marriages and three divorces. The second half is in the form of a diary covering the years 1999 to 2001.

Centered on the poet’s residence in Suginami, a district not far from the heart of Tokyo, the book describes his casual excursions to exhibitions, movie theaters, and social gatherings with young poets, as well as meals farther afield at the homes of European friends. He is an unusually healthy senior, living by himself and taking a light pleasure in his lifestyle, although some nights he feels lonely as he listens to the radio.

“Yearning to return to an illusionary community where we can belong, we call and call each other’s cellphones, toil away at directionless email chat, throng at rock concerts, assemble at izakaya pubs, and throw ourselves into dubious religions,” he writes. “We, who once lived in unity, cannot bear the loneliness of individuality.” The poet’s ruminations on society and the world today are highly apt. (OM)

Born in Tokyo in 1931. In 1952 he caught the attention of the literary world when his poetry appeared in the magazine Bungakukai. In the same year he published his first collection, Nijū oku kōnen no kodoku [trans. Two Billion Light Years of Solitude], which received high praise for its youthful sensitivity. His many other works include 62 no sonetto + 36 and Teigi [trans. together as 62 Sonnets and Definitions], Seken shirazu [trans. The Naif], Kotoba asobi uta [Wordplay Songs], and Toromuso corāju [Tromsø Collage].