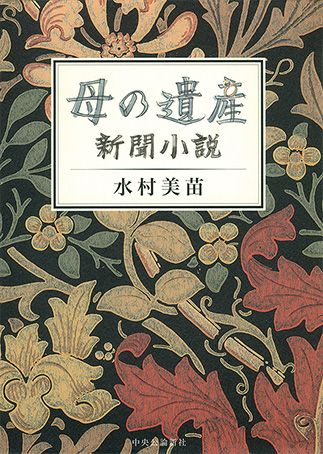 This novel focuses on the life of Mitsuki, a fifty-something woman who works part-time as a university lecturer. There are two main strands to the plot: the prolonged strains the family undergoes as they care for Mitsuki’s elderly mother and the story of her husband’s affair with another woman. Mitsuki’s mother, the daughter of a geisha, remains her freewheeling, selfish, and extravagant self to the end, pushing the two daughters who look after her—Mitsuki and her older sister, Natsuki—to their limits.

The novel traces the frenzied final days of the mother’s life, as she is hospitalized for a fracture and then admitted to a nursing home, where she eventually dies. In parallel with these events, the novel depicts Mitsuki’s shock when she discovers her husband’s affair and follows her as she uses her inheritance to achieve independence and divorce her husband. Despite these weighty subjects, the novel is saved from becoming grim reading by the invigorating clarity of the prose and skillful realism with which Mizumura depicts the lives of the comfortably well-off. It is an accurate depiction of a portion of Japanese society that stands apart from the commonly discussed “working poor.” The tone of the novel’s strategy is set from the outset, when the story begins in medias res with a discussion of money in the course of which the death of the mother is revealed.

The book’s subtitle, Shimbun shōsetsu [A Newspaper Novel], makes it clear that this is an homage of sorts to a whole literary genre. The novel was serialized in the Yomiuri Shimbun, appearing in weekly installments in the newspaper for over a year. Novel serialization continues to hold considerable significance for literature in Japan. (NM)

Born in Tokyo, 1951. Studied French literature at Yale College and Yale Graduate School. Taught modern Japanese literature at Princeton. Awarded the Minister of Education Award for New Artists for Zoku meian [Light and dark continued]; the Noma New Author Award for Shishōsetsu from left to right [An I-Novel]; the Yomiuri Prize for Literature for Honkaku shōsetsu, [A True Novel]; the Kobayashi Hideo Award for Nihongo ga horobiru toki - Eigo no seiki no naka de [The Fall of Language in the Age of English], and the Osaragi Jirō Prize for Haha no isan - Shimbun shōsetsu.