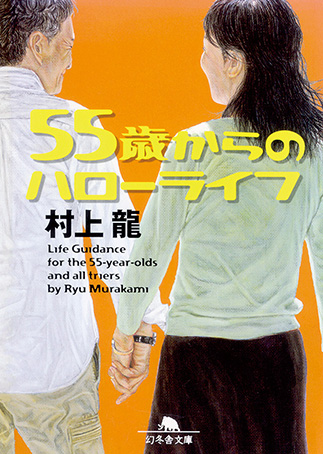 Also published in: Chinese(traditional and simplified characters) and Korean

55-sai kara no harō raifu is a collection of five connected long stories by popular author Murakami Ryū. Although each of the stories stands alone, they all center on ordinary people in late middle age who, having passed the midpoint of their lives, are trying somehow to start again.

The characters include a 58-year-old woman who divorces her husband, unable to face life with him after he retires, and a 54-year-old man who is afraid of becoming homeless upon losing his job at a company. In one story, a man takes early retirement and buys an RV with the severance payment, planning to travel around Japan with his wife. When she unexpectedly refuses, he falls into a kind of depression. In another, a woman loves a pet dog more than her husband. When it dies of illness, her husband, who had appeared cold, comes close and supports her. There is also an old truck driver driven mad by a late-blooming love for an unknown woman.

Incidentally, the Japanese title features an amusing play on words. In Japan today, public employment security offices have been given the nickname “Hello Work” with the aim of making them friendlier places for jobseekers. It could be read as suggesting we should send a greeting to our new life when we decide to start again. The stories expressively describe the varied lives of Japanese people in late middle age. (NM)

Born in Nagasaki Prefecture in 1952. Received the Gunzō New Writers Award and the Akutagawa Prize in 1976 for Kagirinaku tōmei ni chikai burū [trans. Almost Transparent Blue], the Noma Prize for New Writers in 1981 for Koin rokkā beibīzu [trans. Coin Locker Babies], the Tanizaki Jun’ichirō Prize in 2000 for Kyōseichū [Parasites], the Mainichi Publishing Culture Award and the Noma Prize for Literature in 2005 for Hantō o deyo [trans. From the Fatherland with Love], and the Mainichi Art Award in 2011 for Utau kujira [The Singing Whale].