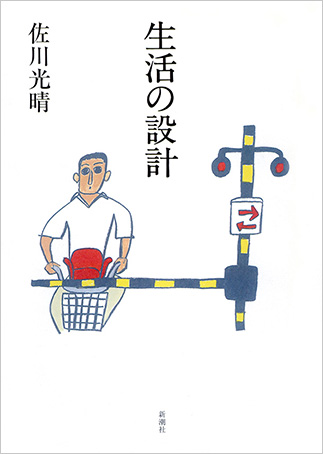 While slaughterhouse workers who kill and process cattle, pigs, and other animals to produce meat are performing an essential job for people’s lives, in contemporary society they are hidden beneath the surface of everyday existence as if they were somehow untouchable. As such, they have rarely been the subject of literature.

Before making his debut, Sagawa Mitsuharu worked in a meat processing plant in Saitama, an experience he put to use in writing Seikatsu no sekkei. The main character in this apparently semiautobiographical novel gets a job at a slaughterhouse at the age of 25, after the company where he is employed goes bankrupt. His wife works, too, so he steadily learns his trade as the days pass while also buckling down to housework and caring for their son when he gets home. He sometimes finds it necessary to be reticent about his job when speaking with those around him, and cannot clearly explain why he chose it. The narrative ends with him declaring with a kind of pride, though, that it is at present the only job for him.

The protagonist’s day-to-day job in a slaughterhouse has its own natural interest, while the descriptions of his relationship with his wife and her parents, as well as friends and colleagues, are finely detailed. In the whole a picture of today’s young people, seeking a way of life that fits their needs, comes into vibrant relief. It certainly is not a work that relies only on the novelty of its subject matter. (NM)

Born in Tokyo in 1965. Traveled around South America as a university student before working at a publisher and a slaughterhouse. Won the Shinchō Prize for New Writers in 2000 for Seikatsu no sekkei, the Noma Prize for New Writers in 2002 for Chijinda ai [Shrunken Love], and the Tsubota Jōji Literary Prize in 2011 for Ore no obasan [My Auntie]. His other books include Kazoku shibai [Family Performance], Eien no chikai [A Promise Forever], Gin’iro no tsubasa [Silver Wings], and Kin’iro no yurikago [Golden Cradle].