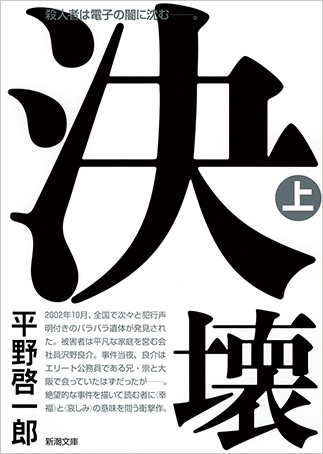 Hirano Keiichiro, one of the premier established writers of modern Japanese literature, made a sensational debut in 1998 with Nisshoku [The Eclipse], a novel set in medieval France. In the ensuing years, he followed up with his longest-ever novel Sōsō [Farewell to the Departed], which fictionally depicts such historic personages as Eugène Delacroix and Frédéric Chopin in nineteenth-century France. These were two thoroughly intellectual novels completely dissociated from the reality of today’s Japan.

In Kekkai, however, Hirano switches gears a decade after his debut to take a good look at the festering underbelly of modern Japanese society. Set in the fall of 2002, the tale gives an account of the gruesome discoveries of a severed human head, hands, feet, and other body parts, first in Kyoto and then other locations across Japan. Next to the head is found a defiant note from the killer, who signs the message as Akuma [the Devil]. The story underscores the violence rampant in modern society, as well as the dark side of humans that has been unleashed by the Internet. Accordingly, the title serves as a warning that modern society is in danger of committing a fatal error that will cause the dam to burst.

On the whole, the narrative evokes the prophetic vision used by Fyodor Dostoevsky to probe human crime and punishment. However, there is no God in Kekkai; instead, it is a story of crime in a godless age. (NM)

Keiichiro Hirano wrote has written more than 17 novels since his debut work “The Eclipse” for which he won the prestigious Akutagawa Prize at the record age of 23. His deeply psychological fiction deals with profound and universal themes like self-love, relationships and acceptance, and spans from short stories and historical novels to essays, love stories and literary sci-fi. As a cultural envoy to Paris appointed by Japan’s Ministry of Cultural Affairs, he travelled all over Europe giving lectures and many of his books have been translated and are widely read in France, China, Korea, Taiwan, Italy and Egypt. In his widely viewed TED talk, he discusses what it means to really love oneself, arguing that it’s not easy to holistically love ourselves without knowing all our “selves”, good and bad, but we can discover the “self” we like with the help of the person we love. Based around this theme, his latest novel “At the End of the Matinee” was a runaway bestseller in Japan and released as a movie in November, 2019. “A MAN” is the first of his novels to be translated into English. His second title in English “At the End of the Matinee” was released in April 2021.