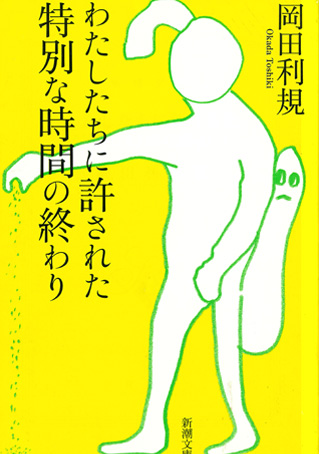 [The End of the Special Time We Were Allowed]

“Sangatsu no itsukakan” has been translated into German and French.

The first of the two stories in this book, “Sangatsu no itsukakan” [Five Days in March], is set in the spring of 2003, when US President George W. Bush announces a large-scale military operation in Iraq. As the date for action presses, a young couple spends this “special time” together.

They meet in a live music club in Roppongi, where the American performers are denouncing Bush. Without either taking the lead, they exit the venue and head for a love hotel in Shibuya. Then the two of them hole up in the room for five days as if they have shut themselves in a shelter to block out the news.

The man, a drifting temporary worker, says, “Are we just going to fuck all through the war? Isn’t that epic?. . . ‘Sex and War’ instead of ‘Love and Peace.’ Or something. I don’t know what the hell I’m saying. But think of it one way, and well, we’re connected to history.” The woman later recalls, “We didn’t have windows or clocks and we didn’t watch TV. The room was like a childhood dream.”

That is the only theme of the story. But why do the two of them spend their “special time” in this way? Their anxiety may have been shared in some way by all the young people of the world.

Some may feel that we have reached the end of the potential for truly original literature. But amid the tendency of Japanese contemporary novels in the 2000s to fall into such desperation, Okada Toshiki shone like a new beacon. And his talent in the theatrical world has already started to gain appreciation in Europe and North America. (OM)

Born in Kanagawa Prefecture in 1973. Playwright, theater director, and novelist. Founded the theater group Chelfitsch in 1997. Received the Kishida Kunio Drama Award in 2005 for Sangatsu no itsukakan. He adapted the work into a short story, included together with “Watashi no basho no fukusū” [My Several Places] in the debut collection Watashi tachi ni yurusare ta tokubetsu na jikan no owari, which won the Ōe Kenzaburō Prize in 2008.