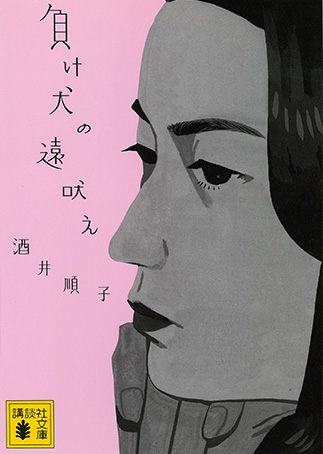 [The Distant Barking of Loser Dogs]

Sakai Junko repurposes the word makeinu (loser dogs) to refer to unmarried childless women over 30, but it does not simply indicate women who are past what is considered marriageable age. The term tacitly refers to well-educated, high-income career women who have achieved a measure of success in their work. With satire and self-deprecation, the book humorously descrybes why loser dogs come into being, the lives they lead, and what they think about their position.

The term “loser dog” reflects sharp social criticism. In Japan, traditional ways of thinking state that men are superior and should go out to work while women should stay at home. This thinking remains deeply rooted, and men are reluctant to marry women who are better educated than them or who have a better career or salary.

However, loser dogs make full use of their abilities and play an active role in society. They are economically independent and are free to go shopping, eat out with friends, or take overseas trips whenever they like. Unlike married women, they do not have to look after husbands or care for children. They can even have love affairs at their own discretion. Through their lifestyles, they show that the idea that “unmarried women are miserable” is simply out of date.

Even so, there is still strong social prejudice against women who marry late or do not marry at all. Sakai writes as if supporting this prejudice, while satirically skewering the society that creates loser dogs and the discrimination they face.

As well as being a description of the environment surrounding women’s social progress and changes in their outlook on love, the book is an excellent work of social criticism and a highly interesting critique of civilization. (CK)

Born in Tokyo in 1966. Wrote a column for a magazine while still in high school. Spent three years working for an advertising agency before becoming an essayist. Makeinu no tōboe won both the Fujin Kōron Literary Prize and the Kōdansha Essay Award. The word “makeinu” was chosen as one of the top ten popular words of the year in 2004. Her other works include Onna o miru kabuki [Women in Kabuki], Naita no, bareta? [Did Everyone Find Out You Were Crying?], and Orību no wana [Olive’s Trap].