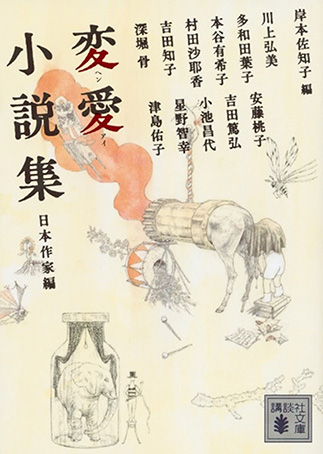 This original anthology consists of 12 short stories by contemporary Japanese writers on the theme of love. In a piece of untranslatable word play, the book’s title includes the invented word “strange love” (hen’ai), which puns on a common word for “love” (ren’ai). The two are also visually similar, with the former written as 変愛 and the latter as 恋愛. Kishimoto Sachiko, popular as a translator of English fiction into Japanese, has already edited and translated two original anthologies of contemporary British and American short stories on the topic, but this collection takes a Japanese perspective. In line with Kishimoto’s wishes, the 12 contemporary Japanese writers chosen have penned their own stories of strange love.

For Kishimoto, hen’ai can be a grotesque, extreme, or bizarre kind of love removed from the usual standards. As these stories show, though, it is in fact, paradoxically, the ultimate form of pure love. The anthology features young authors Motoya Yukiko, Murata Sayaka, and Kinoshita Furukuri; Kawakami Hiromi, Tawada Yōko, and Hoshino Tomoyuki, key writers in the prime of their careers;
and veterans Tsushima Yūko and Yoshida Tomoko. It offers a vivid cross-section of the diversity of the current Japanese literary scene. (NM)

Born in Kanagawa Prefecture in 1960. After graduating from university and working for a liquor manufacturer, became known for translations of works including The Mezzanine by Nicholson Baker, Almost No Memory by Lydia Davis, No One Belongs Here More Than You by Miranda July, Edwin Mullhouse by Steven Millhauser, and Flying Leap by Judy Budnitz. Won the Kōdansha Essay Award for Nenimotsu taipu [The Kind to Hold a Grudge].