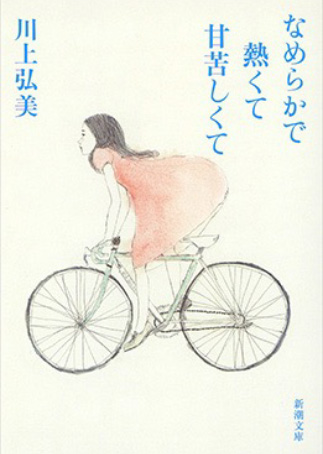 The five stories in this linked collection are titled simply “Aqua,” “Terra,” “Aer,” “Ignis,” and “Mundus,” after the Latin for the four fundamental elements and the world. The first story, “Aqua,” highlights the vulnerability of sensitive adolescent girls through their awakening sexuality and their friendships, as they face a large and inexplicable world. In the second story, “Terra,” the life of the female university student narrator is seen as reflected in the death of her friend’s girlfriend. By contrast, the third story, “Aer,” is told from the perspective of a woman who is going to give birth for the first time. The fourth story, “Ignis,” portrays the relationship between the narrator and Aoki, the man she has lived with for over 30 years, at the same time hinting at the world of the Japanese classic Ise monogatari [trans. Tales of Ise].

The final story, “Mundus,” is the most enigmatic and interesting of all. In the magic-realism-influenced world of the story, filled with curious events and anecdotes, the main character is followed constantly by something unidentifiable, referred to as “that.” Described as “smooth, hot, and sweetly choking,” ultimately “that” may be love.

Within a framework based on the legendary natural forces of the four elements, said to make up the world in ancient Greek philosophy and Buddhist thinking, Kawakami Hiromi attempts here the work of a demiurge, creating a new world out of words. (NM)

Born in Tokyo in 1958. Taught high school and junior high school biology before starting her writing career. Awarded the Pascal Short Story Award for New Writers in 1994 for “Kamisama” [God Bless You] and the Akutagawa Prize in 1996 for “Hebi o fumu” [Tread on a Snake]. Received the Tanizaki Jun’ichirō Prize in 2001 for Sensei no kaban [trans. The Briefcase], which was also shortlisted for the Man Asian Literary Prize in 2012 and the Independent Foreign Fiction Prize in 2014.