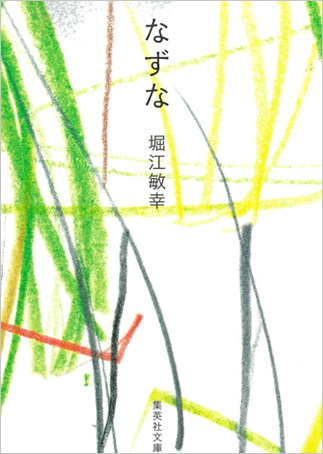 Social and economic changes in Japan are propelling a gradual shift in gender roles, particularly with regard to childcare. In some cases, the father takes leave to look after the children while the mother continues working. Two signs of this phenomenon are the rise of the punning neologism iku-men (men who enjoy ikuji, or childcare) and the emergence of iku-men as fictional protagonists.

Horie Toshiyuki’s novel is an example of an emerging genre, the iku-men novel. The main character is an unmarried man working for a regional newspaper who takes in his infant niece Nazuna when his brother’s wife is hospitalized. It is supposed to be a short-term arrangement, but when the child’s father is involved in an automobile accident overseas, circumstances conspire to keep the infant in the protagonist’s care much longer than expected.

The novel describes the sometimes humorous struggles of a man with no previous childrearing experience to meet the challenges of parenthood. But its real strength lies in its sensitive, lyrical depiction of a new human life from a man’s point of view. “The tiny wrinkles in her lowered eyelids filled him with wonder. How gently a baby closed its eyes!” Few novels convey so vividly the preciousness and fragility of life. (NM)

Born in Gifu Prefecture in 1964. Studied in Paris as a postgraduate before becoming a university lecturer. His 1995 debut novel, Kōgai e [To the Suburbs], was based on his experiences in Paris. Awarded the Mishima Yukio Prize for Oparaban [Auparavant], the Akutagawa Prize for Kuma no shikiishi [The Bear’s Paving Stone], and the Kawabata Yasunari Prize for Literature for “Sutansu Dotto” [Stance Dot]. This last story appeared in a collection that won the Tanizaki Jun’ichirō Prize and the Kiyama Shōhei Literary Prize in 2004.