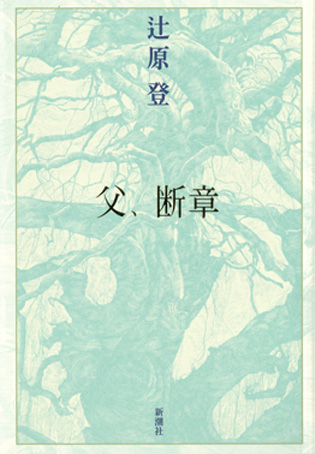 [My Father, A Fragment]

The book opens: “Soon, he knew, he would have to settle down and write truthfully about his father.” Before long, the “he” of the opening lines switches to the first person, and the story that unfolds could be described as a conventional “I-novel” narrative. But the events depicted are raw and fresh and full of narrative interest. With this novel, Tsujihara Noboru, one of the finest storytellers in Japan today, has freely adapted the template of autobiographical fiction to produce a collection of rare brilliance.

Throughout the stories, Tsujihara depicts moments of return and regeneration. In the opening piece, he conjures up an image of his father as he was when he was still alive. In the moving “Natsu no bōshi” [Summer Hat], the narrator suddenly has a vivid flashback of the face of a forgotten girlfriend from long ago. Other stories depart from first-person narrative, casting a spell with their beguiling depictions of remote times and exotic locales. In “Chipashiri,” a convict escapes from a series of remote prisons in northern Honshū and Hokkaidō. “Mushi-ō” [King of Insects] depicts a group of seventeenth-century Han warriors who dream of liberating China from Manchu rule.

All the stories depict moments of encounter or near misses with a returning figure, including the dreamlike piece that concludes the connection, “Tenki” [Weather], in which the first-person narrator’s parents return. In such moments, these new stories encapsulate what makes Tsujihara’s writing so appealing. (NK)

Born in Wakayama Prefecture in 1945. Made his debut in 1985 with the story “Inu kakete” [Swear by Dog]. Won the Akutagawa Prize in 1990 for the novella “Mura no namae” [The Name of the Village], the Yomiuri Prize for Literature in 1999 for Tobe kirin [Fly, Qilin!], and the Tanizaki Jun’ichirō Prize in 2000 for Yūdōtei Enboku [The Rakugo Storyteller Yūdōtei Enboku]. Won the Mainichi Art Award for Yurusarezaru mono [The Unforgiven] in 2010. Was awarded the Medal of Honor (Purple Ribbon) in 2012.