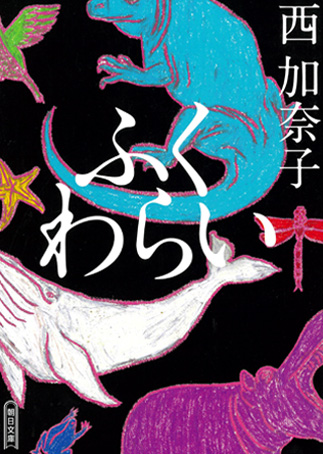 Narukido Sada is the 25-year-old heroine of this novel, named by her father Eizō to recall the Japanese pronunciation of the Marquis de Sade. Eizō is a writer who searched the world for taboo-breaking experiences that scaled the heights of grotesquerie, and Sada grew up accompanying him on this journey. Perhaps this is why even after she becomes a book editor at a publishing house, overseeing a professional wrestler and a blind author, she finds it hard to get on with others, as if there was “a thick, transparent pane of glass between me and other people.” She is good at her job, but is seen as strange by those around her and has no experience of love.

Since childhood, Sada loved the traditional game of fukuwarai, in which blindfolded players try to reconstruct a face by placing the eyes, nose, mouth, eyebrows, and other parts. Even when looking at real people, she does not judge based on beauty or ugliness but prefers those interesting faces that are out of balance. As an editor, she is also fond of the way words formed from unlimited combinations of characters can become sentences and ultimately books.

The novel depicts Sada’s growth, via which, without losing her rare innocence — which also contains its monstrous, grotesque aspects—she shares happiness with others and comes to sense love as a somewhat late bloomer. The reader learns how Sada’s pent-up, inert emotions blossom into an active love.

This unique and lively work of art was the highly deserving recipient of the first Kawai Hayao Story Prize. (OM)

Born in 1977 in Tehran and raised in Cairo and Osaka. After her debut Aoi was published in 2004, her novel Sakura became a bestseller in 2005, selling more than 260,000 copies. Received the Oda Sakunosuke Prize in 2007 for Tsūtenkaku [The Tsūtenkaku Tower] and the Kawai Hayao Story Prize in 2013 for Fukuwarai. Other works include Butai [The Stage] and Saraba! [Goodbye!].