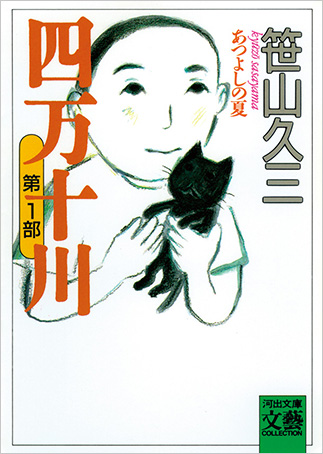 Atsuyoshi, in his third year of elementary school, is the second son among five siblings who live in a mountain village beside the Shimanto River in Kōchi Prefecture. Their parents run a grocery store, so the children help out with the housework as they while away the days in the great outdoors.

One day, Atsuyoshi’s pet cat Kii gives birth to kittens. He has experienced many cat births before, but each time his mother Sumi would thin the litter, leaving behind only two kittens. If they raised too many cats, she said, it would interfere with business. This time, three kittens were born, so the smallest, Kuro, might be abandoned. Atsuyoshi, who sympathizes with weaklings, takes covert action, leading the tale to its surprising conclusion.

This epic novel has six volumes. The first volume, Atsuyoshi no natsu, consists of two chapters: “The Black Kitten” and “The Big Snake of Ubagatani Valley.” When it appeared in 1988 it resonated with many readers, and a series of sequels were released. The sixth volume was published in 1996, finally completing the epic after nearly a decade.

In the novel, the beautiful natural environment of Shikoku is painted in vivid colors, along with the changing seasons. The ever-changing expressions of the mountains and breathing of the river are depicted in lifelike detail, in tune with the children’s laughter that echoes across the river and through the valley, and in touch with the hearts of the people who live there. Without the experience of living on the banks of the Shimanto River, it would be impossible to write this. Against the lush backdrop of Mother Nature, the psychology of a young boy on the cusp of adolescence and the warm human relationships that surround the main characters are expressed in a breezy style of writing. (CK)

Born in Kōchi Prefecture in 1950. Received the Bungei Award in 1987 and the Tsubota Jōji Literary Prize in 1989 for Shimanto-gawa: Atsuyoshi no natsu. Completed the series in 1996 with Shimanto-gawa, dai 6 bu: Kokoro no naka o kawa ga nagareru [The Shimanto River, Part 6: A River Flows Through the Heart]. His other works include Yutaka wa tori ni naritakatta [Yutaka Wanted to Be a Bird] and Haha no Shimanto-gawa [My Mother’s Shimanto River].