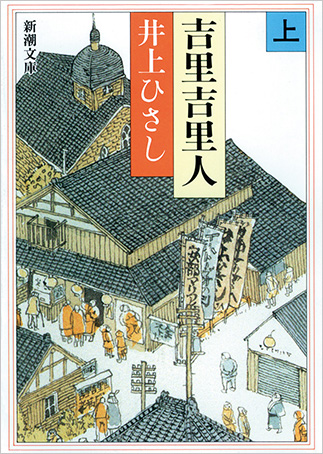 [The People of Kirikiri]

One June, the novelist Furuhashi Kenji is riding on an overnight express train bound for Aomori to collect material for a new novel. Early in the morning, however, the train makes an emergency stop near Ichinoseki, Iwate Prefecture. Men armed with shotguns board the train and demand to see the passengers’ passports. That morning, the impoverished village of Kirikiri in Japan’s northeastern Tōhoku region suddenly and unilaterally declared independence from Japan, becoming the nation of the Kirikiri people. Unable to contain their resentment toward the Japanese government’s neglectful agricultural policies, the farmers set up an independent nation based on the gold standard. They funded their effort with the legendary stash of gold from Fujiwara no Kiyohira, the founder of the Northern Fujiwara dynasty that ruled northern Japan from the eleventh to the twelfth centuries.

As the first writer to visit this newly formed country, Furuhashi gets drawn into the hubbub of commotion surrounding the independence. After being awarded the First Kirikiri Grand Prize for Literature, he climbs all the way up to the position of president. Firmly refusing to recognize the Kirikiri nation, Japan charges its leaders with the crime of rebellion/riotous assembly and dispatches the Self-Defense Forces to suppress the rebels. The people of Kirikiri resist through a series of unconventional schemes, but can they really maintain their independence?

Containing a radical critique of postwar Japan and overflowing with humor and whimsy from beginning to end, this long novel is a welcome rehabilitation of Tōhoku, which always has gotten the short end of the stick in the process of the modernization of the Japanese state. At the same time, it displays an unparalleled level of achievement as a utopian novel that makes full use of the vitality of the Japanese language. (NK)

Born in Yamagata Prefecture in 1934. Widely active as a novelist, playwright, and broadcast writer for radio and television. His major works include Yabuhara kengyō [Yabuhara, the Blind Master Minstrel] (1973, play), Kirikiri-jin (1981, novel), and Chichi to kuraseba [trans. The Face of Jizō] (1994, play). Won the Yomiuri Prize for Literature and Japan Science Fiction Award in 1981 for Kirikiri-jin. In 1984, he formed the theater troupe Komatsu-za. Was a Person of Cultural Merit and a member of the Japan Art Academy. Died in 2010.