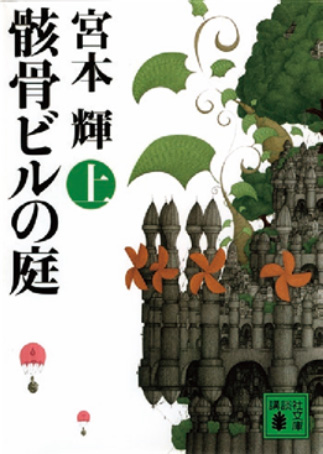 [The Garden of the Skeleton Building]

This novel is set in 1994 in a dilapidated building called the “Skeleton Building” in the Jūsō district of Osaka. The structure has been slated for demolition and redevelopment, but more than 10 long-term residents remain in the building, refusing to leave. The story begins with the arrival of the superintendent, a 47-yearold man named Yagisawa, whose job is to evict them. There he meets a slightly shady bunch of people, including a private detective, a metal carver, a manufacturer of sex toys, a cross-dressing hostess, and a high-ranking gangster. Once he gets to know them, he discovers that they are just regular, warmhearted people from downtown Osaka.

However, they carry a common past. They are all orphans who either lost their parents in the war or who were abandoned by them after the fighting ended. They were picked up and raised in the Skeleton Building by a young man, who inherited the building during the chaotic period right after the war, and his close friend. These two men raised dozens of war orphans this way, out of the goodness of their hearts. Before long, Yagisawa finds himself fascinated by the essential humanity of the residents. Through their reminiscences, he retraces the path of contemporary Japanese history from the end of World War II to the 1990s.

This might also be called a tale starring the city of Osaka itself, which is full of vitality. The characterization is vivid and the plot is so interesting that you won’t be able to put the book down. As you follow the mysteries hidden in the history of the Skeleton Building, you can fully experience the lively atmosphere of postwar Osaka itself. (NM)

Born in Hyōgo Prefecture in 1947. He received the Dazai Osamu Prize in 1977 for “Doro no kawa” [trans. “Muddy River”] and the Akutagawa Prize in 1987 for “Hotaru-gawa” [trans. “River of Fireflies”]. His other works include Ao ga chiru [Youth Fades] and Ruten no umi [Sea of Wandering]. Many of his works have been made into television dramas and films. Miyamoto Teru zen tanpen [The Complete Short Stories of Miyamoto Teru] was published in 2007. Received the Shiba Ryōtarō Prize for Gaikotsu biru no niwa and the Medal of Honor with Purple Ribbon in 2010.