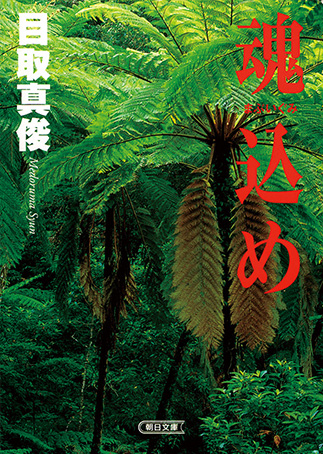 Also published in: French and Korean

This is the first collection of short stories by this Okinawan author, who won the Akutagawa Prize in 1997 for “Suiteki” [Droplets]. The author Hino Keizō, who was on the selection committee for that prize, raved about Mabuigumi: “Not only does it draw from the rich natural environment of the southern islands and the myths and oral traditions that remain there, it also creatively experiments with how to organically combine those raw materials of fiction with the reality of modern-day Okinawa—including its wounds from the war—and how to create a coherent fictional world from them.”

The main character of the title story is Uta, a female shaman who offers prayers called ugan in Okinawan. One night, while playing the sanshin (an Okinawan version of the Japanese shamisen) and singing alone on the beach, a man loses consciousness, as if a sea turtle had stolen his mabui (spirit). Uta prays for days on end, trying to reclaim his mabui and put it back in him, but the man does not revive. The man’s mother died when digging up sea turtle eggs for food during the war. Had the man gone back to the ocean like baby sea turtles?

In all of Medoruma’s works, the worlds of reality and fantasy, modernity and myth, are contiguous. Particularly unforgettable is the story “Umukaji tō chiritei” [Followed by Shadows], included in this collection, which depicts a world so sad and sublime that the spirits of the characters stay with you for days after reading it. A girl who has suffered countless horrible experiences from early childhood finds that she has become able to see the spirits of the dead. Once she joins them, her shade sits on the branch of a banyan tree and speaks to the living. That is how vital and pressing the human desire to pass on one’s own story really is.

To turn the reality of Okinawa into literature is not a straightforward process, but Medoruma continues to devote himself to writing, sharpening and attuning his bodily senses to the southern islands. (OM)

Born in Okinawa Prefecture in 1960. Received the New Okinawa Literature Prize in 1986 for “Heiwa-dōri to nazukerareta machi o aruite” [Walking the Street Named Peace Boulevard], the Akutagawa Prize in 1997 for “Suiteki,” and the Kawabata Yasunari Prize for Literature and the Kiyama Shōhei Literary Award in 2000 for “Mabuigumi.” In addition to fiction, he has published essays and criticism in newspapers and magazines.