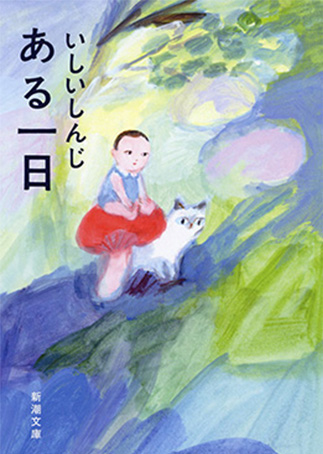 Aru ichinichi reveals a new and entirely unexpected side to Ishii Shinji’s talent. Until now, he has been known mostly for his surrealistic fantasies and fairy-tale settings, but this story of a married couple—to all appearances, the author and his wife—reads more like a conventional autobiographical novel. Even when he is writing about ordinary everyday life, though, Ishii allows his imagination to wander far afield. His reflections span the globe—from an eel spawning ground to the Yaeyama Islands of Okinawa and Latin America—and the writing, full of mushrooms, frogs, and other strange images, brings a touch of the surreal to its depictions of the everyday world.

Ishii also writes about food in appetizing detail, providing masterful descriptions of scenes in which the characters prepare and enjoy traditional Japanese foods like matsutake mushrooms and hamo (pike conger).

The second half of the book is a dramatic account of the birth of the couple’s child in a maternity hospital in Kyoto, where the wife is determined to give birth naturally, even though she is having her first child at the age of forty-three. Although childbirth is a basic part of life, it is a subject that is rarely addressed in contemporary Japanese literature. In his imaginative depiction of the fetus just before birth, as a living thing that moves and feels within the womb, Ishii transcends the limitations of the documentary I-novel. This alone would be enough to make his novel an important, groundbreaking achievement. (NM)

Born in Osaka Prefecture in 1966. In 1996 issued the short story collection Tōkyō Ishii aruki [Ishii’s Walks Through Tokyo], later published as Tōkyō yawa [Tokyo Evening Tales]. Published his first novel, Buranko-nori [The Swing Rider], in 2000. Won the Tsubota Jōji Award for Mugifumi kūtsue [Kutze the Wheat Treader] in 2003. In 2012 Aru ichinichi won him the Oda Sakunosuke Prize, and he received the Kawai Hayao Story Prize for Akusei [Bad Voice] in 2016.