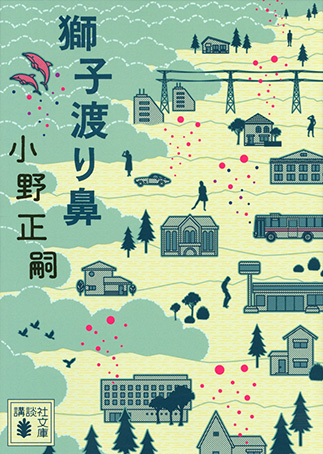 Ono Masatsugu has set many of his stories in a setting reminiscent of coastal Ōita Prefecture, where the author grew up. His characters’ quiet, down-to-earth lives are described in a detailed prose that includes ambitious ideas and elements of magical realism. With this novel, named after a fictional cape in Kyūshū, Ono has added a new dimension to this world and created a masterpiece. The central character is Takeru, a fourth-year elementary school student who has moved from the city to a small coastal village to live under the care of a distant aunt. When he arrives in this alien environment, Takeru is a deeply traumatized young boy. Neglected by their mother, Takeru and his mentally retarded brother have struggled to find enough food to eat. The kindness of strangers and the beauty of the natural environment gradually help him to heal and embrace life. We are never told what has happened to the older brother. As if to fill in for this absence, the ghost of a long-dead youth appears to Takeru from time to time, offering words of encouragement. Writing from a child’s perspective, Ono achieves a new level of freshness and clarity in his writing. Few readers will remain unmoved by his sympathetic portrayal of his vulnerable young protagonist. (NK)

Born in Ōita Prefecture in 1970. Earned a doctorate at the University of Paris VIII. Teaches at the School of Culture, Media and Society at Waseda University. Won the Akutagawa Prize in 2015 for Kyūnen mae no inori [A Prayer Nine Years Ago]. His other works include Nokosareta monotachi [People Left Behind] and Suishinin no kikan [Return of the Drowned]; he has also translated Marie NDiaye’s Rosie Carpe into Japanese.