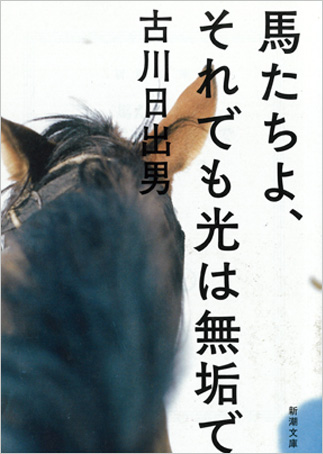 [trans. Horses, Horses, in the End the Light Remains Pure]

This novella, by Furukawa Hideo, has attracted attention as one of the first real responses by a Japanese novelist to the Great East Japan Earthquake of March 11, 2011, and the nuclear power plant accident it brought about in Fukushima. The author was born in the city of Kōriyama, not far from the Fukushima Daiichi Nuclear Power Plant. As you might expect, he was worried about what happened to his hometown. So, in early April 2011, he and some of his editors visited the areas of Fukushima Prefecture around the nuclear power plant, as though driven by a “suicidal impulse.” This work—a kind of travel narrative that records his experiences on that trip—is written in complex, not linear, ways. Time gets distorted and moves back and forth, as if drawn into an “otherworldly dimension” after the catastrophe.

Before long, the fictional main character from Furukawa’s earlier epic Seikazoku [The Holy Family]—a sprawling novel set in the six prefectures of Japan’s northeastern Tōhoku region—appears and joins Furukawa’s group in their car, spinning out a new “tale.” Meanwhile, the author leaves Japan during a long vacation to participate in a gala literary event in New York City. While gazing at the World Trade Center site, he superimposes the events of 9/11 onto those of 3/11. Furthermore, scenes from contemporary Fukushima following the nuclear power plant accident are overlapped with beautiful images from the long-standing tradition known as the Sōma nomaoi, or “wild horse chase,” a military exercise in which wild horses are captured and offered to a Shintō shrine. This kind of style was probably the only way to write a realistic account of the chaotic situation after the earthquake. (NM)

Born in Fukushima Prefecture in 1966. In 2008, published the epic novel Seikazoku [The Holy Family]. Received the Noma Prize for New Writers in 2015 and the Yomiuri Prize for Literature in 2016 for Onnatachi sanbyakunin no uragiri no sho [The Book of 300 Treacherous Women]. His other works include Hosō dōro no kieta sekai [A World Without Paved Roads], Namu rokkunrōru nijūichi bu kyō [Namu Rock ‘n’ Roll Twenty-One-Part Sutra], and Arui wa Shura no jūoku nen [Or a Billion Years of Asura].