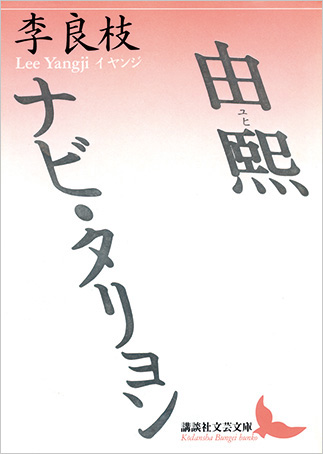 This book is a collection of four short stories written in Japanese by the secondgeneration Zainichi Korean writer Lee Yangji, including her Akutagawa Prize– winning story “Yuhi.”

Sadly, the author’s life was cut short by illness in 1992, when she was 37, but the stories in this book display her importance as a writer who brought vital issues into contemporary Japanese literature from her perspective as an ethnic Korean. In this way, she introduced what the minority writer Nakagami Kenji called something “tangibly new” within the literary currents of ethnic Koreans writing in Japanese.

The story “Yuhi” centers on a protagonist of the same name, an ethnic Korean woman raised in Japan who has hidden her Korean heritage. She moves to South Korea to study and lives in a boarding house in Seoul, but finds it hard to get used to the Korean people and their language. Ultimately she gives up and returns to Japan.

“Nabi taryon” [Sorrow of the Butterfly] is another story told from the perspective of an ethnic Korean woman living in Japan, depicting incidents in her life that range from the marital discord of her parents to the deaths in quick succession of two older brothers, her adulterous relationship with an older Japanese man, and her studies in South Korea.

The characters in these stories vacillate between the Japanese nation in which they were raised and the Korean nation of their parents. These autobiographical works depict young female protagonists in search of their identity. By creating pieces that straddle two cultures and languages, Lee opened up new possibilities for contemporary Japanese literature and earned the admiration of other minority writers of her generation, such as Nakagami and Levy Hideo. (NM)

Born in 1955. Graduated from Seoul University in 1988. Won the 100th Akutagawa Prize for “Yuhi” in 1989. Other works include “Nabi taryon” and “Kazukime” [Diving Maiden]. She died of illness in 1992; in the following year her collected works were published by Kōdansha.