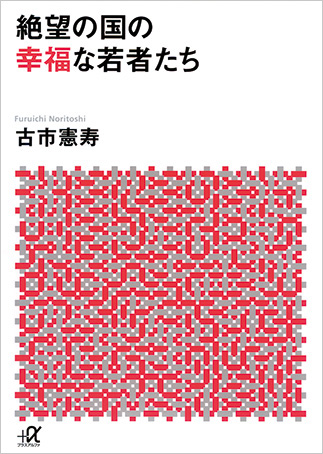 [trans. The Happy Youth of a Desperate Country]

Also published in: Chinese and English

Following the collapse of the economic bubble in Japan in the early 1990s, the recession dragged on for a long time and social inequalities, like an increasingly stratified society and the phenomenon of the “working poor,” who are employed but cannot maintain healthy finances, began to attract attention. Many feel that the prolonged economic sluggishness has disadvantaged the younger generation first in addition to impacting the lifestyle of those in middle or old age. The truth is that as new recruitment continues to fall, young people face difficulty in finding jobs and many are forced into the unstable existence of irregular employment. Also, the intergenerational disparity of burdens borne and benefits received is widening as the population ages. Despite this, however, there seem to be no signs of rebellion among these young people. Why should this be?

This book maintains that there is a huge gap between the generally held image of young people and their reality, and a popular image even further removed from the perceptions of young people themselves. These youths are not as unhappy as one might think. They value their relations with those around them and are satisfied with small blessings. Of course they acknowledge that they have been put at a disadvantage. However, they are well aware that as Japan becomes a mature society, they cannot hope for things to be better tomorrow than they are today.

The author himself is a young person, currently enrolled in a doctoral course at the University of Tokyo. Making full use of this strength, he has cleverly drawn out the real opinions of those of his own generation through interviews. With his steady fieldwork and meticulous examination of the data, Furuichi has managed to develop theories of young people quite unlike anything else to date. (CK)

Born in 1985. Sciences and a senior researcher at the Keiō Research Institute at SFC. His research focuses on the themes of youth and community. Published works include Kibō nanmin goikkō-sama: Pīsu Bōto to “shōnin no kyōdōtai” gensō [The Delegation of Refugees of Hope: The Peace Boat “Community of Approval”], Dare mo sensō o oshierarenai [Nobody Is Able to Teach Us About the War], and Hoikuen gimu kyōikuka [Making Nursery Education Compulsory].