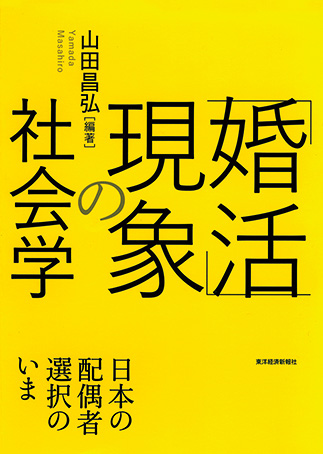 [The Sociology of the Marriage-Hunting Phenomenon]

Creating chances for meeting members of the opposite sex or actively using an introduction agency with a view to marriage is known as konkatsu, or marriage hunting. This book—edited by Yamada Masahiro, who coined the term—makes an in-depth investigation of the phenomenon. It highlights not only the problems of marriage facing young people but also wider social problems facing modern-day Japan.

The book aims to give a better grasp of the phenomenon by presenting papers by researchers alongside evidence from people from marriage go-between agencies and by introducing local government schemes to promote marriage. The evidence from go-between agencies shows us things that only insiders would know, while local government schemes shed light on the way in which these administrations seek to intervene in the process.

Of particular interest is that even marriage hunting has its differences according to the times. Prior to the economic downturn brought on by the Lehman Brothers bankruptcy, the only people involved in marriage hunting were those past the so-called marriageable age. After this financial crisis, which stemmed from America in 2008, the majority of people involved were women out to gain a man who could command a stable, high income even in the midst of a recession.

The book’s consideration of marriage hunting and the reaction of the media that reports on the topic allow a reading of the trends in a rapidly changing society and the changes in people’s awareness. In addition, reports on love and marriage in the United States and marriage hunting in China provide interesting comparative viewpoints to the marriage-hunting phenomenon in Japan. (CK)

Born in 1957. Professor at Chūō University. Specializes in the sociology of the family, with a focus on using sociology to decipher human relationships. Works include Parasaito shinguru no jidai [The Era of the “Parasite Single”], Wākingu pua jidai [The Era of the Working Poor], and Naze wakamono wa hoshuka suru no ka: Hantensuru genjitsu to ganbō [Why Young People Become Conservative: A Reversal of Reality and Hopes].