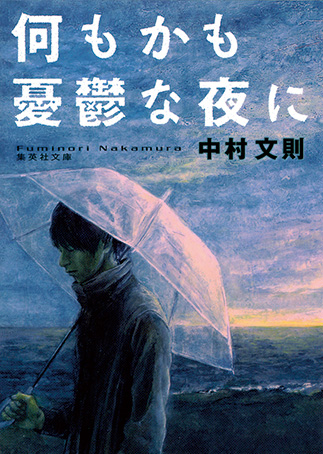 [On a Night When All Is Misery]

Since his debut, Nakamura Fuminori has staked out unusual ground for a young writer by exploring crime, murder, suicide, child abuse and neglect, and other problems plaguing modern Japanese society. His latest work is no exception. The main character, a young man working as a guard in a rural prison, spends his days dealing with the convicts there.

The protagonist was raised in an orphanage and has his own dark past, including an attempt on his own life. Thanks to the influence of the good-hearted orphanage director, he found the will to live and was able to reach adulthood, but a friend was not so fortunate: written on his suicide note were the words “On a night when all is misery.”

The protagonist finds himself troubled by the case of a convicted murderer incarcerated at the prison. Still a minor, the convict merely waits resignedly for his death sentence to be carried out. Why does he not fight his conviction? Does he deserve to die? Is the death penalty justifiable in the first place? The main character confronts such questions, to which there are no easy answers.

The publication of this work was timely: Japan had just announced a lay judge system (to be launched in 2009) in which citizens serve as de facto jurors, leading to heightened consciousness of how trials are conducted and culpability assessed. Debate about capital punishment has also grown heated in recent years. In the context of these social developments, this novel takes on a significance reaching beyond that of a mere work of fiction. (NM)

Born in 1977. Received the Noma Prize for New Writers in 2004 for Shakō [The Shade]. Winner of the Akutagawa Prize in 2005 for Tsuchi no naka no kodomo [trans. The Boy in the Earth]. Also won the David L. Goodis Award in 2014 and the Bunkamura Deux Magots Literary Prize for Watashi no shōmetsu [My Vanishing] in 2016. Kyōdan ekkusu [Cult X] became a bestseller with over 180,000 copies sold. His other works include A and Anata ga kieta yoru ni [The Night You Disappeared].