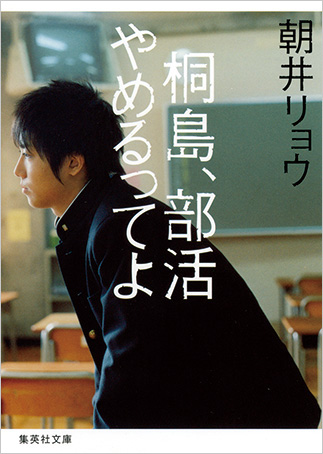 When the volleyball club’s Kirishima—“the captain we can count on”—suddenly retires from club activities, it has a small but palpable ripple effect on the lives of five other students at a provincial high school. “Club activities” is the key phrase that links five members of as many different clubs—baseball, volleyball, brass band, girls’ softball, and film—in a variety of ways.

Readers will first of all be drawn in by the novel’s rhythm and language; they will also appreciate the vivid imagery conjured by its numerous metaphors. While writing that contains many metaphorical expressions can be difficult to read if poorly rendered, in this work they communicate with brilliant clarity the atmosphere of the world of 17-year-old high school students and their unstable emotions. The energetic flow of language has the same effect as listening to a J-pop tune; catching the rhythm of this groovy melody brings lifelike depictions of the young characters into sharp focus.

With the depiction of each character’s frustrations and joys, a realistic portrayal of a group of students takes shape in bold, three-dimensional relief thanks to the author’s clever compositions. Such is the degree of perfection that it is hard to believe this is the debut novel of a 20-year-old writer. This work is a masterpiece among novels of adolescence. (MT)

Born in 1989. While attending Waseda University, won the 2009 Shōsetsu Subaru Prize for New Writers for this novel, his debut as a writer. Won the Naoki Prize for Nanimono [Somebody] in 2013 and the Tsubota Jōji Literature Award for Sekai chizu no shitagaki [Draft for a World Map] in 2014. Other works include Chia danshi!! [Cheerleading Boys!], Supēdo no 3 [Three of Spades], Budōkan, Mamanaranai kara watashi to anata [Because It Didn’t Go How We Expected, Me and You], and Nanisama [Who Do You Think You Are?].