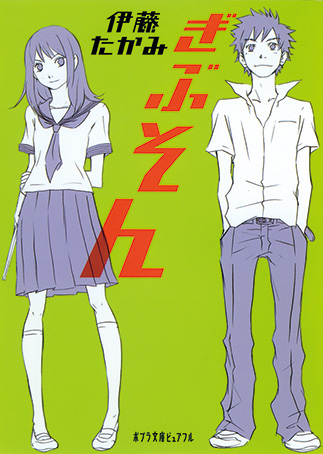 Playing in a band is an essential part of growing up for young people in Japan today. Kids aim to get a band together with some like-minded friends, work on covers of the rock bands they admire, and someday play live on stage. But this is a far cry from the Western idea of sex, drugs, and rock ’n’ roll—these are junior high school students playing what is really just a cute, comical game of being in a band. This book depicts this school-based band culture, a very Japanese phenomenon, with a humorous and lyrical style.

The protagonist is Gaku, an eighth-grader infatuated with the popular American band Guns N’ Roses. Gaku plays guitar and sings. His close friend, a boy called Maro, plays bass, while his childhood friend, a girl named Lilii, is on the drums. Gaku hears rumors of a fantastic young guitarist and goes off to visit Kakeru, who owns a Gibson Flying V. Kakeru lives in a rundown house with his alcoholic grandfather; there is some conflict within the band when he joins. They cannot even manage to play a Guns N’ Roses song. Nevertheless, the four aim to play live at the school culture festival and single-mindedly throw themselves into their practice. Then a fleeting love begins to bud between the protagonist and Lilii.

This is an invigorating boy-and-girl story set in the autumn of 1988, when Emperor Shōwa fell ill. (NK)

Born in 1971. In 1995, while still a Waseda University student, he won the 32nd Bungei Award for Joshu seki ni te, guruguru dansu o odotte [Dance Round and Round in the Passenger’s Seat]. Also won the Shōgakukan Children’s Publication Culture Award for Mika! in 2000 and the 21st Tsubota Jōji Literature Award for Gibuson [Gibson] and the 135th Akutagawa Prize for Hachi gatsu no rojō ni suteru [Abandoned on the Street in August] in 2006.