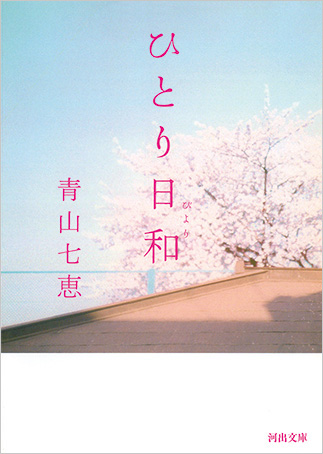 [A Perfect Day to Be Alone]

Humans basically live their lives alone. This is the story of a contemporary woman who lives according to this idea naturally, without forcing herself into it.

The protagonist is Mita Chizu. She has graduated from high school and is making a living for the time being as a furītā, a “freeter” flitting between temporary jobs. When her mother, a teacher, gets sent abroad for training, Chizu goes to live with Ginko, a 71-year-old distant relative who lives on her own.

Thus the two women of different ages begin their shared existence, one in which they both seem to be living alone. Although Ginko’s house looks onto the nearby station platform of a private railway line, it has been left out of the re-development of the station area because of the strange layout of the streets. Each morning the station is packed with people bound for busy Shinjuku, a contrast to the occupants of the house who idly watch them from the veranda. Perhaps the house itself symbolizes the way the two women, together but living alone, distance themselves from society.

Chizu’s mother advises her to go to university, but Chizu can think only about how much it will cost. Not wanting to feel indebted, she steps back from her mother and from society. Even when she gets a boyfriend, from the start she thinks about how the relationship will end.

This book shows the lifestyle and mindset of young people today, each living their own lives in a “oneness” that is different from solitude. (MK)

Born in 1983. Won the Bungei Award in 2005 for Mado no akari [Light in the Window]. In 2007 received the 136th Akutagawa Prize for Hitori biyori. Also won the Kawabata Yasunari Prize for Literature in 2009 for Kakera [Fragments]. Her other works include Mahō tsukai kurabu [The Wizards’ Club], Watashi no kareshi [My Boyfriend], and Akari no kohan [Lakeside of Light].