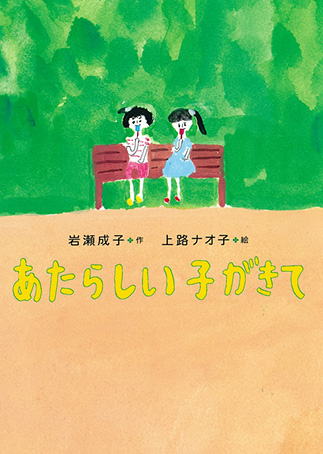 [When the New Child Came]

This superb depiction of the inner world of a young child was written by Japan’s 2022 Hans Christian Andersen Award for Writing nominee.

“Our mother left home, so now it’s just my father, my little sister, and me”: at first, heroine Miki’s monologue seems to hint at a story about divorce, but in fact Miki’s mother has recently given birth and is spending the first few weeks with the new baby in her parental home.* Right from the opening, we sense Miki’s unease at the prospect of her parents’ attention being stolen away by the birth of a “new child.”

When Miki and her one-year-younger sister Rui are joined by their younger brother at home, Miki is not sure if she thinks the baby is cute or not. Nevertheless, everyone keeps reminding her that she is a big sister now. Through interactions with a range of people—including Rui, her parents, her grandmother, her grandmother’s sister, a 57-year-old woman with a mental age of three whom she meets in a park, and that woman’s own younger brother—Miki’s feelings change subtly, if slowly, and she gradually becomes glad that her brother was born.

The author’s vivid powers of description convincingly convey Miki’s mental state as she slowly overcomes her sense of vague alienation and learns to accept her little brother with tenderness. This book was awarded the distinguished Noma Prize for Juvenile Literature. (NA)

* Known as sato-gaeri (“returning to one’s hometown”), this is a common practice in Japan.

Born in Tokyo in 1966. After working as an office worker, became an illustrator. Does magazine and advertising work as well as illustrating and designing books. Books she has illustrated include Namida hikkondero [Don’t Come Out, Tears] written by Iwase Jōko, Bundākanmā [Wunderkammer] written by Kashizaki Akane, and Kankyō kagaku ehon: Kimochi [Environmental Science Picture Book: Feelings] (monthly picture book) written by La Zoo.