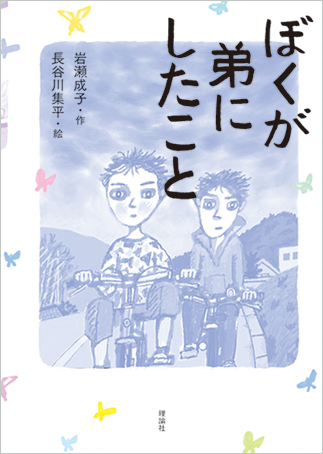 [What I Did to My Little Brother]

This first-person story is told from the perspective of Mario, a sixth-grade boy, and depicts his emotional swings from day to day. One day, Mario sees his younger brother Morio touching his jigsaw puzzle without asking, and in a seething rage, he punches him as hard as he can. His mother scolds him, but he can’t apologize. Even he can’t understand his violence toward his brother, but it leads him to recall his father, who his mother divorced three years before. His father worked in a civil engineering office, and was an athletic type with a fifth dan in judo. When Mario made mistakes at softball or ended a loser at sports day, his father called him “Idiot,” “Stupid,” and “Moron,” kicking and punching him. If he spoke willfully, his father shut him in the closet. Painful memories of this abuse return unexpectedly, and are initially raw.

At the same time, these memories don’t govern his life completely, and the book’s appeal lies in his quiet rescue from despair. This is seen through his mother’s efforts to build a new life for the family, saying, “We didn’t run away”; in a classmate who works to accept his parents’ remarriage and new family; and in Morio’s sharp observation in remembering a giant “spider” in their former home. There is a particular sense of reality in how the minor words and actions in those around Mario accumulate to help in the process of escaping from memories of his father’s abuse. In the final scene, Mario apologizes to his brother for hitting him while they look up at a tree in the park where butterflies gather. One senses the quiet strength of children that can bounce back even when rejected by adults. (OM)

Born in Yamaguchi Prefecture in 1950. Made her debut as a novelist in 1977 with Asa wa dandan miete kuru [Morning Is Gradually Coming into View]. Has won numerous awards, including the Shōgakukan Award for Literature, the Robō no Ishi [Roadside Stone] Literature Award, the Noma Prize for Juvenile Literature, the Tsubota Jōji Literature Award, and the JBBY Award. Her works include “Uso ja nai yo” to Tanigawa-kun wa itta [“It’s Not a Lie,” Tanigawa Said], Mayoi-dori tobu [The Stray Bird Flies], Sono nukumori wa kienai [That Warmth Doesn’t Go Away], Matsuri-chan [Matsuri], Pīsu virejji [Peace Village], Atarashii ko ga kite [When the New Child Came], and Kimi wa shiranai hōga ii [It’s Better That You Don’t Know].

Born in Hyōgo Prefecture in 1955. Made his debut in 1976 with Hasegawa-kun kirai ya [I Hate Hasegawa] that won the Creative Picture Book Newcomer Prize. Is active in a variety of fields including picture books, novels, and illustrations. Won the Japan Picture Book Award. His picture books include Tonbo-tori no hibi [Capturing Dragonflies], Torigorasu [Trigorus], Ashita wa getsuyōbi [Tomorrow Is Monday], Hōmuran o utta koto no nai kimi ni [To You Who Have Never Hit a Home Run], Ōkina ōkina fune [A Huge, Huge Ship], Oyogu hito [Swimmer], and Faiā [Fire]. Has also published novels including Mienai ehon [The Invisible Picture Book].