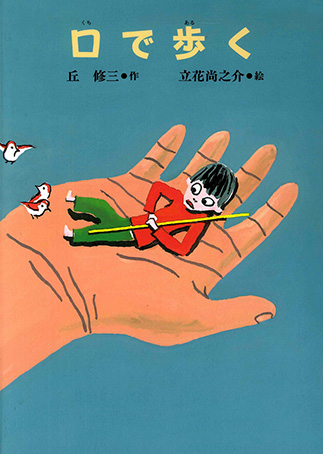 The protagonist of this book is Tachibana-san, a man with a severe disability who has “been in bed for more than 20 years.” One fine morning, Tachibana-san decides that it is a nice day for a walk, and the story begins. His mother helps him onto a bed with casters so it can roll. Under the bed are tissues, towels, spoons, cups, straws, and even a urine bottle. To these Tachibana-san adds his notebook, his wallet, and a stick to use in place of his hand, and his preparations are complete. From this point on, the story is about Tachibana-san taking a walk in his own unique style—by calling out “Excuse me!” to passers-by and asking them to push him for a while. Interestingly, not everyone who cooperates is an agreeable character. A student brooding over entrance exams, a woman who is suspiciously eager to introduce Tachibana-san to a “god” who can heal his body, an old man who grumbles that his family treat him poorly—everyone Tachibana-san encounters has their own issues to deal with, adding to the reality of the story.

The most appealing aspect of the book is Tachibana-san’s unfailing good cheer. He names the stick he uses instead of his hand his “namaken-bō” (a pun on namakeru, “lazy”), he distracts the overzealous woman from her attempts to introduce him to her “god” by offering to let her use his urine bottle . . . Unbothered by his disability, Tachibana-san truly does use his “mouth” to progress, and sometimes his inventive approach to daily life and sharp sense of humor prove to be just what the people he encounters need. In this story we glimpse the outlines of a society in which people support each other across boundaries of disability status. (OM)

Born in Kagoshima Prefecture in 1941 and spent his childhood in Kumamoto Prefecture. Started writing children’s literature after working as a teacher in a school for children with disabilities. Won awards including the Niimi Nankichi Children’s Literature Prize, the Tsubota Jōji Literature Award, and the Shōgakukan Award for Literature. His works include Kaze ni fukarete [Blown by the Wind], Boku no onēsan [My Big Sister], Shōnen no hibi [Boyhood Days], Uso ga ippai [Too Many Lies], Keyaki no mori no monogatari [Story of the Zelkova Forest], Fuku no kami ni natta shōnen [The Boy Who Became the God of Good Fortune], and An-chan ga iku [There Goes My Big Brother].

Born in Gunma Prefecture in 1945. Drew pictures while working as a freelance writer. After illustrating the Mutsugorō series written by Hata Masanori, devoted himself to painting. Has also published picture books including Fushigi funyafunya furanken [The Mysterious Shaky Frankenstein] planned and drafted by Kondō Masanori. Has also illustrated books including the poetry collection Niji no zō-san [The Rainbow and the Elephants] written by Haruna Eriko and Boku no jinsei [My Life] written by Oka Shūzō. Has also written essays including Otoko wa kyū ni tomarenai [Men Can’t Suddenly Stop].