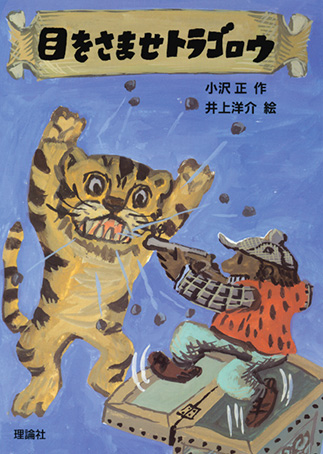 This delightful book begins with a simple introduction: “In a bamboo grove lived a tiger named Torano Toragorō.” From there, the story unfolds into an eight-part narrative of Toragorō’s adventures. In the first chapter, “Hitotsu ga futatsu” [One Into Two], a fox invents a magical duplicating machine. A monkey uses this invention to turn one apple into two. A rabbit does the same with a carrot. Toragorō decides to create a double of himself, so that one of him can take a nap while the other goes in search of steamed meat buns. Things do not quite go as planned, however, as the two Toragorōs start to bicker over which one should nap and which one should work. This comical setback teaches Toragorō the valuable lesson that you cannot split yourself in two, setting the stage for the rest of the book.

Next comes “Kiba o nakusu to” [The Missing Fang], which begins with Toragorō setting off in search of one of his two fangs, which has gone missing. On the way, he meets a chicken who agrees to tell Toragorō where the fang is if he eats a worm. Despite his reluctance, Toragorō eventually works up the courage to try one. A pig then goads him into trying a rotten potato, while a sheep gets him to eat some dead grass. Finally, Toragorō meets a woodcutter and his wife, who make him eat soup so foul it brings tears of anguish to his eyes. After the last, bitter gulp, Toragorō sees his missing fang sitting at the bottom of the soup bowl. He puts the fang back in his mouth and, feeling mighty and powerful once more, immediately devours the woodcutter, his wife, and all the animals that worked their mean-spirited mischief on him.

Over the course of these fable-like episodes, the naive, innocent Toragorō overcomes his uncertainties and anxieties about who he is to develop a fuller sense of self. The book has garnered widespread acclaim over the years, with many calling it a masterpiece of children’s literature. (NA)

Born in Tokyo in 1937. Started creative activities while still an undergraduate and launched a coterie magazine Pū to research children’s stories. Won the NHK Children’s Literature Encouragement Award for Me o samase Toragorō. His works include Kobuta no kakurenbo [Piglets’ Hide-and-Seek], Nonbiri kobuta to sekaseka usagi [Easygoing Piglet and Restless Rabbit], and Hoshi kara kita uma [The Horse from the Stars]. His picture books include Kitsune no pan to neko no pan [Fox’s Bread and Cat’s Bread] illustrated by Chō Shinta and Boku wa Heitarō [I Am Heitarō] illustrated by Uno Akira. He passed away in 2008.

Born in Tokyo in 1931. Was active in a variety fields such as manga, picture books, and tableaus. Has won numerous awards, including the Bungeishunjū Manga Award, the Shōgakukan Award for Painting, the Kōdansha Publication Culture Awards Picture Book Award, the Japan Picture Book Award Grand Prize, and the JBBY Award. His picture books include Magareba magari michi [When You Turn the Road], Aji no hiraki [Cut Open and Dried Horse Mackerel], Densha ehon [Picture Book of Trains], Chōtsugai no ehon [Picture Book of Hinges], and Bōshi [Hats]. Has also illustrated books including Kuma no ko Ūfu [Oof the Bear Cub] written by Kanzawa Toshiko. Passed away in 2016.