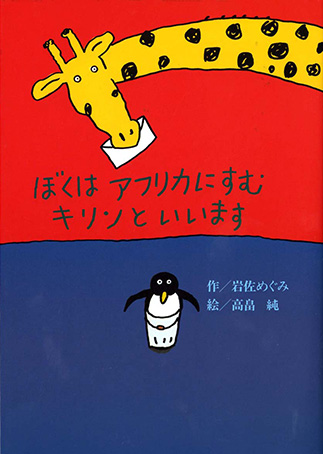 A very bored Giraffe lives in the African savannah. When he learns that Pelican, also rather bored, has started a new mail service, he decides to send a letter to someone. He pens a simple note—“I am Giraffe. I live in Africa. I’m famous for my long neck. Please tell me all about yourself”—and asks Pelican to deliver it to the first animal he meets on the other side of the horizon. After Pelican makes it past the horizon, he meets Seal, who also happens to be delivering mail, and gives him the letter from Giraffe. Seal takes the letter to Penguin, who lives at Whale Point.

The next day, Pelican arrives back at Giraffe’s home with a reply in hand. Having waited so long that his neck has already grown five more centimeters, Giraffe is eager to find out all he can about his new pen pal. However, Pelican cannot remember the name of the animal he got the reply from—only that it sounded like “Pelican.” On the other side of the horizon, Penguin is puzzled himself: he has no idea what a “neck” is, and Professor Whale’s well-meaning but vague explanation is not much help.

The two new pen pals thus begin their correspondence knowing hardly a thing about one another, leaving everything to their imaginations. As they write letters back and forth, Giraffe and Penguin start getting funnier and funnier ideas about what the other is like. Their imaginations continue to run wild until the climax of the story, where Giraffe makes himself resemble Penguin as best he can and then heads off to meet him face to face. Giraffe’s skewed idea of what Penguin looks like is simply hilarious.

Written at a leisurely pace and filled with quirky illustrations, the delightful Yours Sincerely, Giraffe is perfect for children who are just starting to read stories themselves. The book has even spawned five sequels, all telling the stories of different pairs of animal pen pals. The German translation of the book won the children’s book category of the German Children’s Literature Award in 2018. (FY)