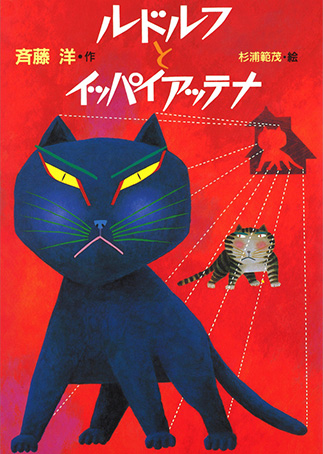 Rudolf is a little black cat that belongs to a girl who lives in a small town. One fateful day, when Rudolf swipes some fish from a fishmonger, a man spots him in the act and gives chase. Rudolf manages to hide in the trailer of a truck on its way to Tokyo. He arrives in the big city and meets a huge male tabby cat who turns out to be the local “boss.” Everywhere the “boss” goes, he gets called something different. The boss tells Rudolf that when it comes to names, he’s “got a lot” (ippai attena)—and Rudolf mistakenly assumes that his name is “Ippai Attena.”

Although Rudolf wants to find his way home, he has no idea what the name of his hometown is. He has no choice but to rely on the helpful Ippai Attena. Ippai Attena used to have an owner, too, who actually taught him to read. But that owner later moved to the United States, leaving Ippai Attena to make his way as the biggest, baddest stray in the neighborhood. Rudolf spends his days by Ippai Attena’s side, learning the ins and outs of surviving on the streets from his older, wiser friend.

Ippai Attena also teaches Rudolf to read, an ability that helps him finally figure out the name of his hometown. Rudolf prepares to head home, and Ippai Attena is there to help every step of the way—but just as Rudolf is about to set off, a vicious bulldog severely injures Ippai Attena in a fight. What is Rudolf to do?

Humming along in brisk, crisp prose, this story is a portrait of two cats, their friendship, and their adventures together. Narrating from the cats’ perspective also lets the author paint the human world in a satirical light. Loved by young readers for years and even adapted into an animated film, the book stands as a classic in the genre. (SY)

Born in Tokyo in 1952. Graduated from Chūō University Graduate School of Letters. Received the Kōdansha Award of Children's Literature for Newcomers in 1986 for his debut Rudorufu to Ippaiattena [trans. Rudolf and Ippai Attena]. Won the Noma Prize for Juvenile Literature Newcomer’s Award for Rudorufu tomodachi hitoridachi [Rudolf, His Friends, and Independence] in 1988, the Robō no Ishi [Roadside Stone] Literature Award in 1991, and the Noma Prize for Juvenile Literature for Rudorufu to sunō howaito [Rudolf and Snow White] in 2013. His other works include the Pengin [Penguin] series, the Obake zukan [Monster Picture Book] series, the Shirakoma ki [Shirakoma Chronicles] series, and the Saiyū ki [Journey to the West] series.

Born in Aichi Prefecture in 1931. Illustrator and graphic designer. Has won awards including the Shōgakukan Award for Painting, the Nippon Picture Book Award Grand Prize, and the Bologna Children’s Book Fair Graphic Prize. His picture books include Furuya no mori [trans. Dreadful Drops] written by Tsurumi Masao, Matsuge no umi no hikōsen [Airship on the Eyelash Sea] written by Yamashita Haruo, Mushi no uta [Insects’ Poems] written by Miki Taku, and Kobutori Tarō [Tarō and His Lumps] written by Takadono Hōko.