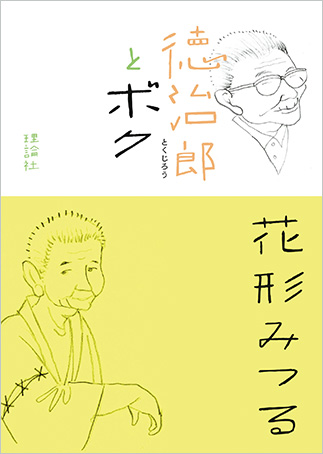 The Tokujirō of this book’s title is the protagonist and narrator’s grandfather. Hard of hearing and stubbornly contrarian, Tokujirō has lived by himself since the death of his wife. When his family comes over for the Bon festival (a summer observance when families and relatives gather to honor the spirits of their ancestors), Tokujirō parks himself in front of the TV and watches in silence. Taciturn and grumpy as he is, however, Tokujirō makes taketonbo (bamboo-copters) for the narrator, and even catches beetles for him in the woods behind the house. As he tells the narrator about the wonders of nature, Tokujirō gradually opens up and shares stories about his past.

Tokujirō was born in 1923, the year of the Great Kantō Earthquake, and the stories about what he was like as a boy are fascinating. Tokujirō admits that he was never much for studying, but he was quite the athlete, excelling at the annual school sports festival. In addition to hiking into the mountains to find chestnuts and pick wild grapes, he obtained things through more mischievous means, too. He reminisces about creeping into neighbors’ gardens to pilfer tomatoes, loquats, and natsumikan (summer oranges), recalling these “death-defying” escapades like they were nothing. Tokujirō was evidently quite a headache for his parents.

As the book progresses, the narrator grows from age 4 to age 12, and Tokujirō enters the last years of his life. After a heart attack, Tokujirō begins the gradual journey to the end, with his grandson always close by. Their tightening bond sheds light on the hardheaded Tokujirō’s experiences and creates a channel for passing them along, linking past and present and giving the narrator a sense of his place in the family’s history. As the author fleshes out the narrative with the family’s discussions about how to care for Tokujirō and some long-secret war stories, the central theme of connection between grandfather and grandson paints Tokujirō’s unique way of life clearly and without excess sentimentality. By the end, the narrator has collected a rich trove of memories with his grandpa, a gift of life to treasure forever. (NA)