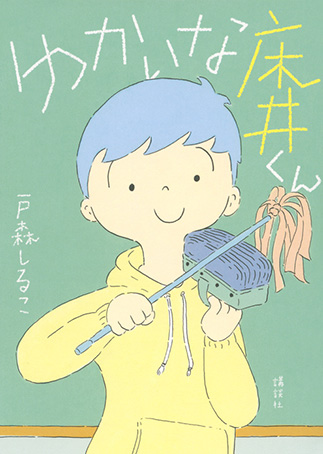 Here are 14 episodes in the year of sixth-grader Koyomi, who gradually becomes romantically interested in her classmate Tokoi after he is assigned the seat next to her.

Because Koyomi is tall, in fifth grade she was teased for being a “giant” and developed a complex. But when Tokoi, who is short, says that it is good to be tall, Koyomi gains confidence and her other classmates stop teasing her. Another time when a classmate loses a keychain and tries to blame Koyomi, Tokoi comes to her defense, saying that she would not do something like that. Koyomi also meets Tokoi during summer vacation, on the way back from the pool with her cousin, who is one year younger (their mothers are identical twins and close, so they all live together). The three of them have Oronamin C energy drinks together, and Koyomi becomes more interested in Tokoi than ever. Back at school after vacation is over, she tells him that she likes him.

There are many other colorful characters in the story, such as Ushiroda, who loves insects and is critical of others with different opinions; Suzuki, who talks at cram school but hardly says a word at school; Komori, who is disconcerted by the start of her periods; Nakamura, who talks about building a candy house with his father at Christmas; and Hibiki, who feels pressure from his musician father. Through interactions with her classmates, Koyomi realizes that there are many kinds of individualities and people dealing with adverse circumstances. She is impressed by Tokoi, who takes everyone as they are. The light, witty conversations are fun, and the book conveys the message that understanding others from different angles is the way to communicate better. (DY)

Born in Saitama Prefecture in 1984. Received the Kōdansha Award of Children's Literature for Newcomers for her debut Bokutachi no Riaru [Our Friend Riaru]. Has won awards including the Juvenile Literature Award for Newcomers and the Noma Prize for Juvenile Literature. Her works include Jūichigatsu no māburu [Marble in November], Rika junbishitsu no bīnasu [Venus of the Science Prep Room], Torikorōru o sagashite [Searching for the Tricolor], Renko-chan no sagashimono [What Is Renko Looking for?], and Janome [Janome]. Has also published picture books including Shikakui machi [The Square Town] illustrated by Yoshida Hisanori.