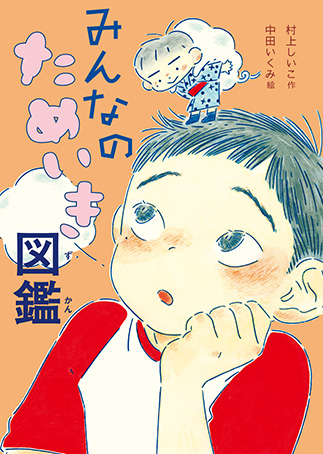 Tanoue Ranta, a fourth-grader who goes by the nickname “Tanochin,” is assigned a group project for school: make an original encyclopedia and present it on parents’ day. Tanochin’s group decides to make an encyclopedia of sighs, or “En-Sigh-Clopedia,” and its members start asking their classmates about where and why they sigh.

Working with Tanochin are a boy named Kōshirō and three girls named Koyuki, Nanaho, and Yura. However, Yura spends all her time in the school nurse’s office. Tanochin asks Yura to draw the pictures for the encyclopedia, hoping to get her to come back to the classroom, but Koyuki insists that she will do the art instead. Torn between the two girls, Tanochin finds himself seeking advice from an unlikely source: “Little Sigh,” a drawing Yura makes of a little boy in a kimono. According to Yura, Little Sigh came out of Tanochin’s own sighs, but when Tanochin gets home that day, Little Sigh leaps out of his school bag and starts talking to him—the drawing has come to life.

Little Sigh takes Tanochin to the “Sigh Festival,” a gathering packed with Sighs that Tanochin discovers are the “alter egos” of other children. He eventually finds the Sighs belonging to Koyuki and Yura and asks them what drove the two girls apart. Once he knows what happened, Tanochin is able to come up with an idea for helping his two classmates mend their friendship.

The five children speak in lively Kansai dialect, making their endearingly innocent efforts to resolve the troubles that arise in their friendship a delight to read. The comical blend of the mundane and the fantastic adds to the fun, with the quirky Sighs seamlessly woven into the realistic school setting. The group’s “En-Sigh-Clopedia” is included as a bonus at the end of the book. (FY)

Born in Mie Prefecture in 1969. Writes across a broad range of fields, including picture books, children’s stories, and novels. Has won awards including the Hirosuke Fairy Tale Award and the Noma Prize for Juvenile Literature. Her works include Utau towa chiisana inochi hiroiage [To Write Poetry Is to Save a Tiny Life] and Shinitai, desu ka [You Want to Die?]. Her picture story books include Kamekichi no omakase jiyū kenkyū [Kamekichi’s Leave-It-to-Me Free Study] illustrated by Hasegawa Yoshifumi, the Wagamama oyasumi [Selfish Holiday] series illustrated by Hasegawa Yoshifumi, and the Nichiyōbi no kyōshitsu [Sunday in the Classroom] series illustrated by Tanaka Rokudai.

Born in Saitama Prefecture in 1982. Has published works based in Japan and Taiwan. Her picture books include Yamashita-kun wa shaberanai [Yamashita Never Speaks] written by Yamashita Kenji and Mama, dotchi ga suki? [Mom, Who Do You Love More?] written by Orita Rinen. Has also illustrated books including Kimihiro-kun [Kimihiro] written by Itō Miku. Books she designed include Boku wa ierō de howaito de, chotto burū [I’m Yellow, White, and a Little Bit of Blue] written by Brady Mikako and Wizu yū [With You] written by Hamano Kyōko. Her manga works include Kamome no koto wa yoku shiranai [I Don’t Know Kamome Well] and Tsukumo-gami Pon-Pon [Pon-Pon the Artifact Spirit].