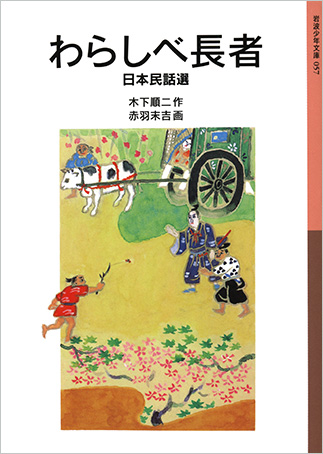 [The Straw Millionaire: A Selection of Japanese Folktales]

This small-format paperback reissue of a 1962 book features 22 folktales from across Japan, retold by playwright Kinoshita Junji in a distinct voice that brings out the fun of their snappy dialogue and hayashikotoba (rhythmic refrains with no particular meaning). Making an appearance in the selection is the timeless favorite “Kani mukashi” [trans. The Monkey and the Crab], which begins with a crab planting a persimmon seed in her garden and diligently watering the soil until the tree finally starts to sprout. The crab is about to taste the fruits of her labor when a monkey from the mountains turns up and throws a persimmon at the crab, mortally wounding her. Before she dies, she hatches a group of baby crabs who crawl out from under her shell to seek revenge. The crabs befriend a chestnut, bee, cow dropping, rack for drying rice sheaves, and stone mortar as allies for the climactic battle with the monkey. This story has been published numerous times as a standalone picture book.

In “Misokai-bashi” [Misokai Bridge], a charcoal maker by the name of Chōkichi has an odd dream in which a figure tells him that something good will happen if he stands on Misokai Bridge. Chōkichi stands on the bridge for a full five days, but nothing happens. An onlooker asks what Chōkichi is doing and bursts out laughing when he hears the story. Mockingly, the man tells Chōkichi that he also heard something in a dream: “Dig under a cedar tree in the garden of a man by the name of Chōkichi, and you will find a vast treasure.” Chōkichi hurries home and starts digging, soon finding an enormous treasure that makes him the richest man in the village. In the collection’s afterword, Kinoshita explains that, intriguingly, “Misokai-bashi” has an almost identical counterpart in English folklore: The Pedlar of Swaffham, about a man instructed to wait on London Bridge. (FY)

Born in Tokyo in 1914. Playwright. His play Yūzuru [Twilight Crane], published in 1949, was performed by actor Yamamoto Yasue more than 1,000 times. His other plays include Ottō to yobareru nihonjin [A Japanese Named Otto], On’nyoro seisuiki [The Rise and Fall of On’nyoro]. His picture books include Kikimimi zukin [The Happy Hearing Hood] illustrated by Hatsuyama Shigeru, Kani mukashi [trans. The Monkey and the Crab] illustrated by Shimizu Kon, and Emaki Heike monogatari zen kyū kan [Tale of the Heike Picture Scrolls (Vol. I–IX)] illustrated by Segawa Yasuo. He passed away in 2006.

Born in Tokyo in 1910. Moved to Manchukuo (modern-day northeast China) in 1932 and returned to Japan in 1947. Published his first picture book Kasajizō [Six Jizō and the Braided Hats] written by Seta Teiji in 1961. Was the first Japanese artist to win the Hans Christian Andersen Award for Illustration, and is highly praised both in Japan and abroad. His picture books include Momotarō [Peach Boy] written by Matsui Tadashi, Sūho no shiroi uma [trans. Suho's White Horse] written by Ōtsuka Yūzō, and Oni zoro zoro [A Troop of Ogres] written by Funazaki Yoshihiko. He passed away in 1990.