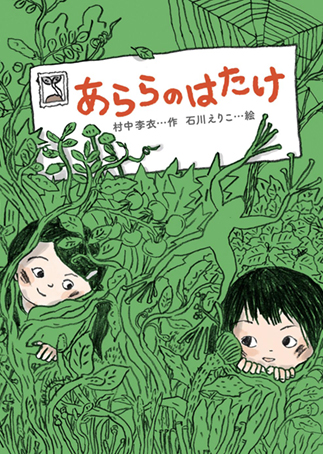 This story is told in letters sent back and forth between Eri and Emi, two friends in the fourth grade of elementary school.

Eri, who has just moved from urban Yokohama to rural Yamaguchi Prefecture, is given a small field by her grandfather and makes new discoveries daily as she grows strawberries and herbs there. Weeds that sprout up again in new locations after being trodden on too many times, komatsuna greens that atavistically grow tougher leaves when birds eat them, and spiders that put less effort into their webs when a storm is on its way: the letters Eri writes to Emi convey her excitement at sensing the vital energy of living beings other than humans.

Meanwhile, Emi, who has remained at the same school in Yokohama, is worried about their childhood friend Ken, who refuses to leave his room after being bullied. In letters that clearly convey her care and concern, she tells Eri about sticking her leg through the cat door of Ken’s room, throwing a box of vegetables sent by Eri through that cat door only to discover that a lively frog was inside the box too, and learning that Ken has made a pet of the frog. When she writes at the end about seeing Ken riding his bicycle outside at last, it imparts hope to the reader as well.

In this digital age, the two girls actively choose to spend the time writing letters to each other. This, hints the book, is what makes it possible for their friendship to deepen as they imagine each other’s circumstances. (SY)

Born in Fukuoka Prefecture in 1955. After working as a designer, became an illustrator and picture book author. Won the Kōdansha Publication Culture Awards Picture Book Award. Her picture books include Bota-yama de asonda koro [When We Played on “Bota” Mountain], Ahiru [Duck], Kan keri [Kick the Can], Hon’ya neko [The Bookstore Cat], and Kokun [Nodding] written by Muranaka Rie. Books she has illustrated include Todoke, Saruhashi! [Reach My Heart, Saruhashi!] written by Ashihara Kamo and Usagi to harinezumi: Kyou mo ii hi [Rabbit and Four-toed Hedgehog: Today Is Another Good Day] written by Hara Masakazu.