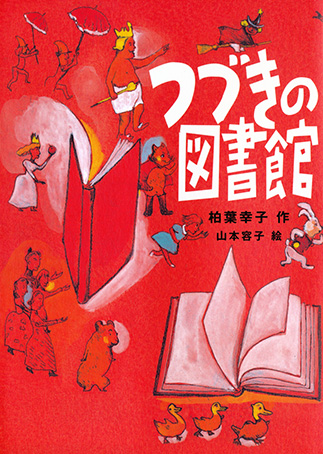 [The Library of What Happened Next]

This book tells of the mysterious experiences of Momo, who starts working at a small library in her hometown when her aunt Anzu, who lives in the same town, is hospitalized.

When Momo goes to the library, the emperor comes out of a picture book of The Emperor’s New Clothes, saying, “I want to know what happened next with Aota Sanae.” Momo visits Anzu in hospital, and the emperor flies out of a red book in her bag, setting the town abuzz with rumor. A junior high school student comes forward saying that Aota Sanae is his mother, and Momo goes to see her. Sanae reveals that, to her regret, when she went to hospital as a child she lashed out at and chased away the stepmother who looked after her kindly, and took out her anger on The Emperor’s New Clothes after identifying her father with the emperor in the story. Thus, the emperor gets to meet Sanae, but rather than vanishing, he goes on to live with Momo. A wolf and an amanojaku (contrary demon) also come out of their books, wanting to know what happened next with their readers. Finally, a ghost emerges, who is connected to Momo, her father, and Anzu as well.

Momo is withdrawn and socially awkward, so it is interesting to watch her help the characters from the library’s books with their searches and get to know the town, deepening ties with the people there. All the townspeople the books’ characters are searching for have their own past and present troubles, provoking contemplation about our reasons for reading in the first place. There are also letters from Momo to people important to her at the start of each chapter, and the reader can enjoy trying to work out who the intended recipients are. (DY)

Born in Iwate Prefecture in 1953. Won the Kōdansha Children’s Literature Newcomer Prize while still an undergraduate, and then became an author. Has won awards including the Sankei Juvenile Literature Publishing Culture Award, the Shōgakukan Award for Children's Literature, and the Noma Prize for Juvenile Literature. Author of numerous fantasies, including Kiri no mukō no fushigi na machi [Mysterious Town Beyond the Fog], Kimyōji yokochō no natsu [trans. Temple Alley Summer], Misaki no mayoiga [Mysterious House on the Cape], Boku to kāsan no kyaraban [Caravan of My Mother and Me], and Ōsama ni koi shita majo [The Witch Who Fell in Love with the King].

Born in Saitama Prefecture in 1952. Copperplate print artist who has provided prints for numerous book covers and illustrations. Has won awards including the Kōdansha Publication Culture Awards Book Design Award and the Kyoto Art and Culture Award. Her collections of artworks include Eru no okurimono [Literature Is a Gift of Love], and Tenrankai no tenrankai [Exhibition of Exhibitions]. Has also published essay books including Gurītingu [Greeting]. Her picture books include Inu no Rūkasu [Lucas the Dog], Oko-chan [Little Oko], Chūrippu-batake o tsumasaki de [Tiptoe Through the Tulips], and Dyūku [Duke] written by Ekuni Kaori.