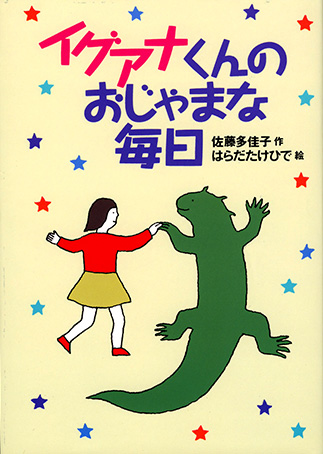 For Juri’s eleventh birthday, Great-Uncle Tokuda gives her what he calls a “living dinosaur,” which turns out to be an iguana. He tells her to care for it in the sunroom that her family recently added to their house. Reluctantly, Juri becomes the iguana’s caretaker. The sunroom was supposed to be a place for her father to read and her mother to raise plants, but Great-Uncle Tokuda is head of trustees at the school where Juri’s father teaches, making it difficult to refuse him.

Juri starts having to wake up early to prepare a special salad for the iguana, which has been named “Yadamon” (“I don’t wanna”). One day she forgets to feed Yadamon, and he destroys the room’s books, potted plants, and curtains. Another day Yadamon seems to be ill, and Juri rushes around searching for a vet. When her parents fight about the new pet, Juri goes out in the middle of the night, hoping to abandon Yadamon. At school, the other children tease her, calling her “Iguana Girl.”

Gradually, however, the family becomes accustomed to Yadamon, even fond of him. He “did not fuss, or become worried, sad, or angry. He was a creature completely unlike a human—a creature that lived unhurriedly in a dream of ancient green.” When Great-Uncle Tokuda demands they return Yadamon to him, Juri’s father stands up to Tokuda for the first time, shouting, “Forget it, you old coot!” He is fired, but the household has come to see Yadamon as a valuable life, and decided to coexist with him.

With simple but warm illustrations and humorous writing, this book leaves the reader with much to think about on subjects like pets, life, and coexistence with other beings. (SY)

Born in Tokyo in 1962. Writes across a broad range of fields, including children’s literature, children’s stories, and novels. Has won numerous awards, including the Sankei Juvenile Literature Publishing Culture Award, the Robō no Ishi [Roadside Stone] Literature Award, the Yamamoto Shūgorō Prize, and the Yoshikawa Eiji Prize for New Writers. Her works include Samā taimu [Summertime], Kugatsu no ame [September Rain], Kiiroi me no sakana [The Yellow-Eyed Fish], Akarui yoru ni dekakete [Going Out in the Bright Night], Hansamu gāru [The Handsome Girl], Isshun no kaze ni nare [Becoming a Gust of Wind], and the Shiro-garasu [White Crow] series.

Born in Tokyo in 1954. Is active in picture books and illustrations. Won the UNICEF Ezra Jack Keats International Award for Excellence in Children’s Book Illustration for the first time as a Japanese artist. Also won the Sankei Juvenile Literature Publishing Culture Award. His picture books include Pashuraru sensei [Mr. Pacheral], Furanchesuko [Francesco], Ōkina ki no ie: Watashi no Niko Pirosumani [A Big Wooden House: My Dear Niko Pirosmani], and Shiroi ohige no hito [The Man with a White Beard]. Books he has illustrated include Gokuraku chōcho [Butterfly of Paradise] written by Yamashita Haruo.