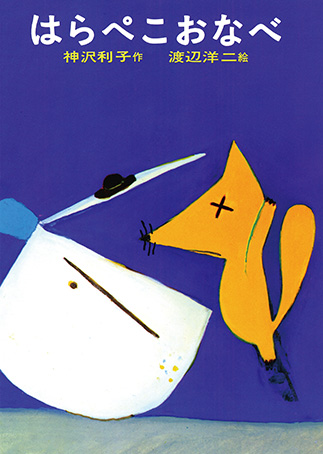 An old saucepan has spent her whole life diligently making food only for people. Now, tired of working, she wants to eat instead. Vowing that “from now on I’ll eat my fill of all the delicious things I want,” she leaves the house in search of food. First, she swipes a sausage from a rat and gobbles it down. Next, she meets a hen and swallows it whole, saying “I’ll eat anything!” Her next stop is a field, where she takes a seat and munches away at some cabbage and tomatoes. In the forest, she fights off a hunter to make a meal of a fox. Later, she even devours a whole cow out in a pasture.

Eating everything she comes across, the saucepan keeps getting bigger and bigger—but, because she still feels hungry, she begins to feel uneasy. She eventually meets a mosquito who tells her that she could go to the sea, enjoy all the fish she can eat, and even feast on a whale. The last scene caps off the hilarious, nonsensical tale with the saucepan blasting off into space, stretching the scale of the story even further.

The saucepan heroine has a thrilling vitality as she frees herself from the servitude of making food for people and follows her insatiable appetite in gobbling her way through a series of encounters. Watanabe Yōji’s charming illustrations add even more fun to the reading experience. Still a popular favorite today, more than 50 years after its release, Hara-peko onabe (along with Furaipan jiisan [Grandpa Frying Pan], 1969, also by Kanzawa Toshiko) stands as a masterpiece of children’s literature. (NA)

Born in Fukuoka Prefecture in 1924 and spent her childhood in Sakhalin. Has won numerous prizes, including the Japan Association of Children’s Literature Scholars Prize, Japan Children’s Song Award, Robō no Ishi [Roadside Stone] Literature Award, and the Iwaya Sazanami Literature Award. Her children’s story books include Chibikko Kamu no bōken [The Adventure of Little Kamu], Furaipan jiisan [Grandpa Frying Pan], Itazura rakko no Rokko [Rokko the Mischievous Sea Otter], and the Kuma no ko Ūfu [Oof the Bear Cub] series. Has also published Shika yo ore no kyōdai yo [Oh Deer, My Brother] illustrated by G. D. Pavlishin and other picture books.

Born in Tokyo in 1943. Has illustrated picture books and children’s books. Received the Nippon Picture Book Award and the Akai Tori Illustration Award. Picture books he has illustrated include Hamabe no isu [A Chair on the Beach] written by Yamashita Haruo, Pon-Pon Yama no tsuki [The Moon of Pon-Pon Mountain] written by Aman Kimiko, Sō-chan wa okkotte irun damon [Because Sō-chan Is Angry] written by Tsutsui Yoriko, and Matteru [Waiting] written by Moriyama Miyako. Has also illustrated books including Arumajiro no shippo [The Armadillo’s Tail] written by Iwase Jōko.