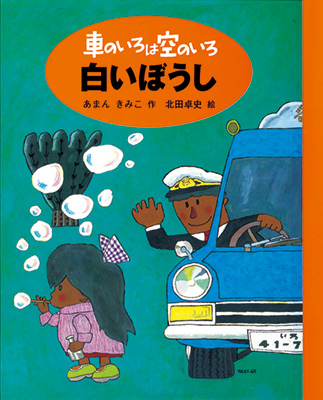 [The Car Is the Color of the Sky: The White Hat]

Matsui Gorō is a taxi driver. Some of the passengers who hail his sky-blue cab are a little peculiar, but Matsui is honest and earnest by nature, and drives them all to their destination with courtesy and care. In the springtime, he encounters fox kits who appear in the form of boys to help Matsui with a flat tire. On a midsummer afternoon, he gives a mother a ride to visit her sons, who died in wartime bombing. As the leaves turn gold in autumn, he helps a wildcat doctor hurry to his ailing mother’s side. And in winter, Matsui gives a ride to an ursine gentleman who lives as a human in the city. Each of these fares sees Matsui somehow slip into a time and place other than our own reality. Through minor episodes where the everyday and the extraordinary meet, we catch a glimpse through rifts in time of themes like the love between parent and child and the tragedy of war. The book is ideal for children who have started to understand the distinct pleasure of narrative.

Each of the eight stories in the book can be read separately, but if read from end to end the sequence is carefully arranged to showcase the changing seasons from spring to winter. The lingering scent of natsumikan (summer citrus), dazzling midsummer sunlight, ears of rice ripening to gold, briskly chilly winter air . . . The writing engages all five senses, conveying the seasons to readers with deftly described smells, colors, and atmosphere. Kitada Takushi’s illustrations are simple but wonderful, making Matsui’s warm personality evident at a glance.

Born in Manchukuo (modern day northeast China) in 1931. Has won numerous awards, including the Sankei Juvenile Literature Publishing Culture Award, the Shōgakukan Award for Literature, the Noma Prize for Juvenile Literature, the Japan Association of Children’s Literature Scholars Newcomer Prize, and the Hirosuke Fairy Tale Award. Her works include Kitsune no michi wa ten no michi [The Fox Road Is a Heavenly Road], and Fūta no yuki matsuri [Fūta’s Snow Festival]. Her picture books include Onita no bōshi [Onita’s Hat] illustrated by Iwasaki Chihiro, Chī-chan no kage-okuri [Chī-chan’s Shadow-Sending] illustrated by Ueno Noriko, and Okāsan no me [In My Mother’s Eyes] illustrated by Kuroi Ken.

Born in Tokyo in 1921. Won the Shōgakukan Award for Painting. Books he illustrated include Chokorēto sensō [The Chocolate War] and Satoru no jitensha [Satoru’s Bicycle], both written by Ōishi Makoto. His picture books include Poppō yogisha [Puff-puff Owl Trains] written by Yazaki Setsuo, Boku no ima iru tokoro [Where I Am Now] written by Kako Satoshi, Yamaneko okotowari [No Wildcats Allowed] written by Aman Kimiko, and Kon’ya wa otsukimi [Tonight is Moon-Viewing Night] written by Tani Shinsuke. Passed away in 1992.