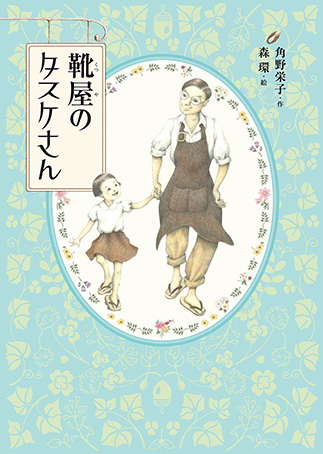 This charmingly illustrated story transports the reader to 1942 Tokyo for the tale of a little girl drawn to a cobbler’s handiwork during World War II. The cobbler is Tasuke, a gangly young man with thick glasses who sets up shop in the town that the girl, who is in her first year of elementary school, calls home. Fascinated by Tasuke’s craft, she routinely drops by his shop after school to watch him hunch over his workbench, hammer away at shoe soles, and sew pieces of leather together with tough strings dipped in hide glue as he repairs shoes for his customers.

The girl begs her father to let her order a pair of red shoes from Tasuke, and finally he agrees. Tasuke closes the shop to go in search of the leather he will need, and when he returns he uses it to make the girl a pair of shoes that fit perfectly. She is so thrilled with them that she wears them for her Shichi-Go-San celebration (literally a “seven, five, three” celebration, a rite of passage to wish for the health and well-being of young children in the years they turn seven, five, and three).

Tasuke has been exempted from the draft on account of being extremely nearsighted, which makes him feel like a “problem” for “not being able to serve the country.” As the war situation worsens, however, even Tasuke is called up to fight, disappearing from the girl’s life. And, after this, the girl’s house, Tasuke’s shop, and even the little red shoes all burn to ash in bombing raids.

In this simple story for younger readers, Kadono Eiko—a recipient of the prestigious Hans Christian Andersen Award—highlights the contrast between the girl’s peaceful, innocent day-to-day life and the violence of war. Distinctive, immersive illustrations not only vividly recreate the wartime setting but also add heft to the story by selectively using the color red only for the shoes that the girl receives from Tasuke. (SY)

Born in Hokkaidō Prefecture in 1965. Taught herself to draw with pencils and began publishing her works in 2006. Published her first picture book Tilde à Travers Bois in France in 2015. Has also published picture books including Gama ojisan no yama [Uncle Gama’s Mountain] and picture story books including Hon’ya no Mimi, odekake suru! [Mimi the Bookseller Goes Outside]. She has also illustrated books including Boku no doragon [My Dragon] written by Ono Rien.