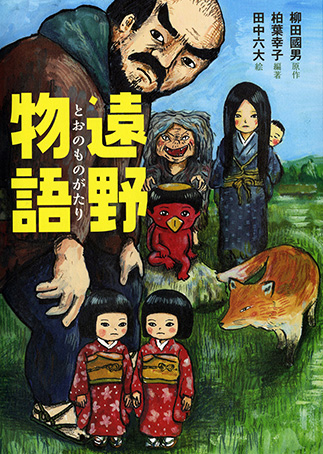 The Tōno region, nestled amid the mountains of Iwate Prefecture in northern Japan, is famous for its folktales. Its residents have long resided among mountains, rivers, and fields filled with mystery, and this resulted in a wealth of stories which are still told to this day. The original Tōno monogatari [trans. The Legends of Tōno] was published in 1910 by folklorist Yanagita Kunio, collecting stories gathered by Sasaki Kizen, a Tōno native himself.

Kashiwaba Sachiko’s 2016 Tōno monogatari is a retelling of the stories from among Yanagita’s collection that the author, who spent much of her early childhood in Tōno, wanted to share with the children of today. The book contains 12 tales of mysterious beings, introduced by Zumo, a local kappa (water sprite). The kappa of Tōno have the same turtle’s shell, webbed feet, and water-filled depression in the crown of their head as kappa elsewhere in Japan, but while those kappa are green, Tōno kappa are red.

The beings that appear in the book range from charming to terrifying. The zashiki-warashi, a household deity that looks like a child; the mayoiga, a house that suddenly appears in the mountains; the futtachi, an aged beast that torments humans . . . some of the stories are sad, even cruel, but others are humorous. Each is filled with individuality. There are tales that do not end with a “Happily ever after,” and others that defy comprehension entirely; in Tōno, all have traditionally told to children and grandchildren as true stories. Even Sasaki Kizen’s great-grandmother makes an appearance. It seems she appeared before her family 27 days after her death, perhaps not feeling ready to leave the mortal plane. Even today, the people of Tōno live side-by-side with mysteries. (SJ)

Born in Hyōgo Prefecture in 1875. Founder of folklore studies in Japan and one of modern Japan’s most important thinkers. After working as an agricultural bureaucrat and a writer at a newspaper company, devoted himself to collecting, studying, and publishing oral tradition and unique belief systems. Author of numerous works, including Kagyū kō [Research on Dialect Words for “Snail”], Nihon no minzokugaku [Folklore Studies in Japan], Nihon no matsuri [Festivals in Japan], Momotarō no tanjō [The Birth of Peach Boy], and Kyōdo seikatsu no kenkyū hō [How to Research Local Lifestyles]. Many collected editions of his works have been published and are still read today. Passed away in 1962.

Born in Iwate Prefecture in 1953. Won the Kōdansha Award of Children's Literature for Newcomers while still an undergraduate, and then became an author. Has won awards including the Sankei Juvenile Literature Publishing Culture Award, the Shōgakukan Award for Children's Literature, and the Noma Prize for Juvenile Literature. Author of numerous fantasies, including Kiri no mukō no fushigi na machi [Mysterious Town Beyond the Fog], Tsuzuki no toshokan [The Library of What Happened Next], Botan-san no fushigi na mainichi [Ms. Botan’s Wonderful Days], Tobimaruryū no annainin [A Guide for Tobimaruryū the Dragon], and Ōobasan no fushigi na reshipi [Grandaunt’s Magical Recipes].

Born in Tokyo in 1980. Manga artist and illustrator. Author of numerous picture books, including Oshikko mora-sutā [The Star Who Peed His Pants], Udon tai rāmen [Udon vs. Ramen], Tsuraretara tabechau zo obake [The “If You Yawn Too, I’ll Eat You” Ghost] written by Inui Eriko, Fushigi na kaban’ya-san [The Mysterious Bag Seller] written by Motoshita Izumi, and Daiku no Takohachi-san [Takohachi the Carpenter] written by Uchida Rintarō. Has also published manga works including Kukkī kan no machi meguri [The Cookie Box’s City Tour].